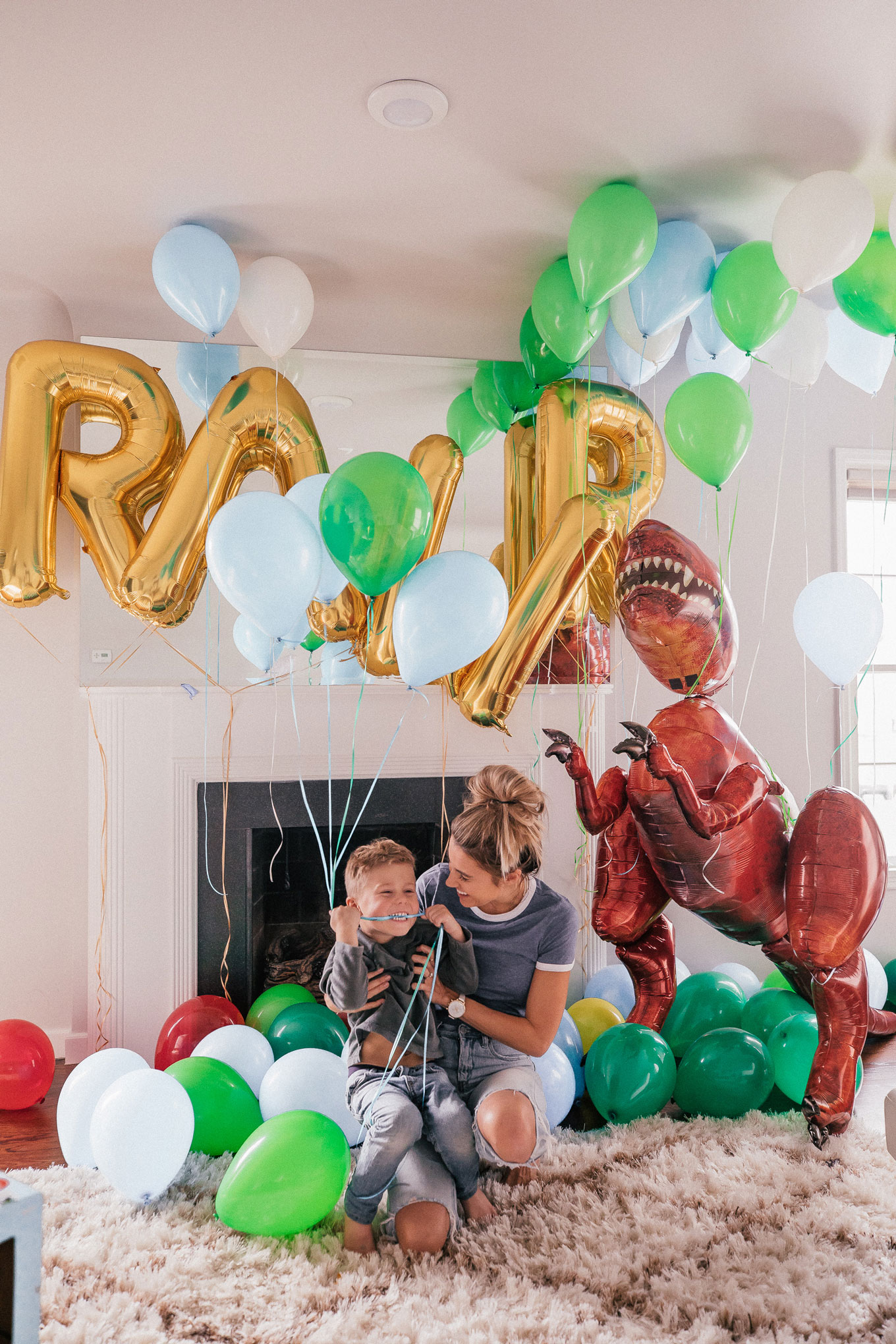 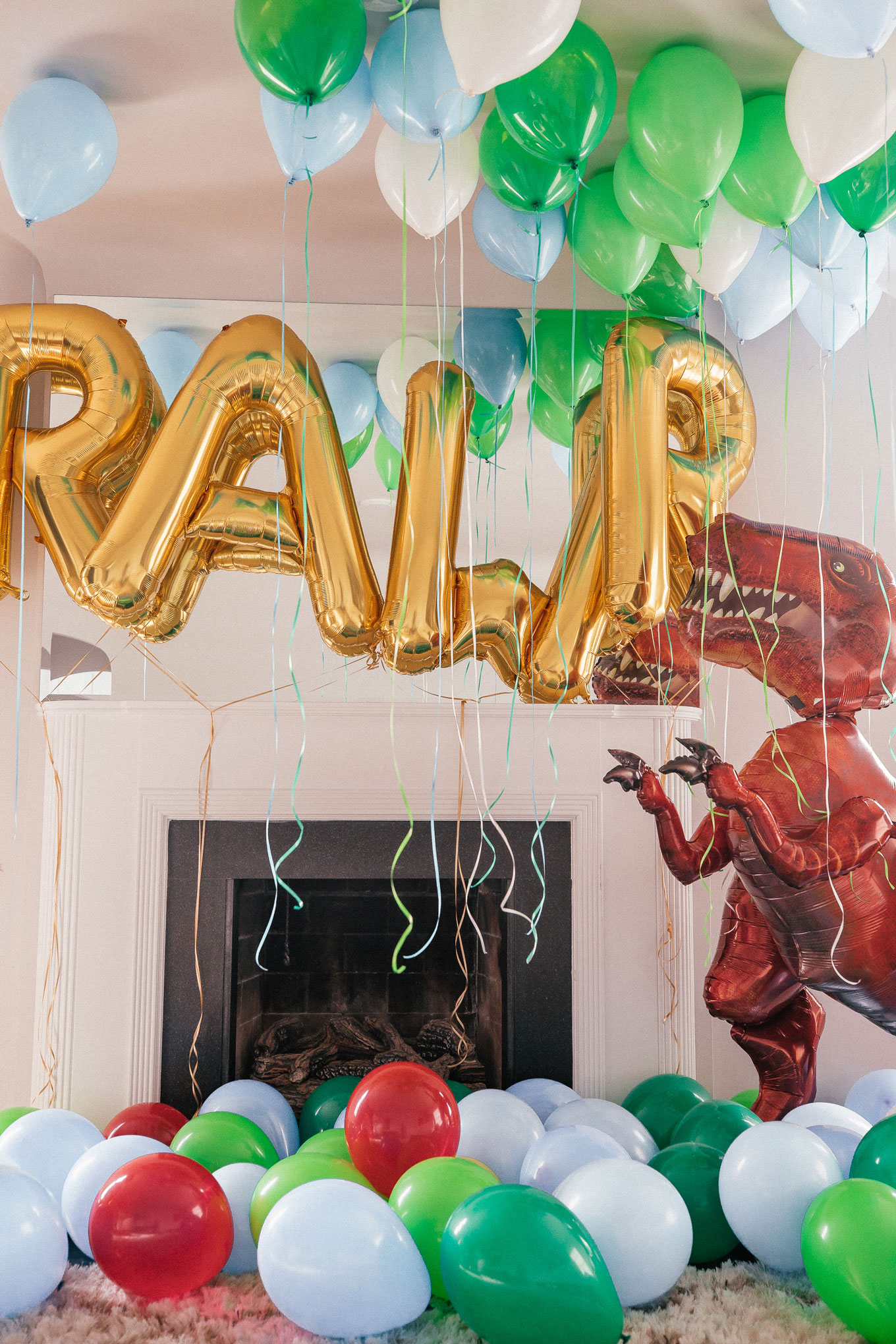 Beckam is obsessed with Dinos right now so we went with a Dino themed party. The huge T-rex ballon was definitely a favorite he stands up all by himself its so cute! It was funny because we got these RAWR balloons and then on the cake they spelt roar – and I never realized their is multiple ways to spell roar 🙂 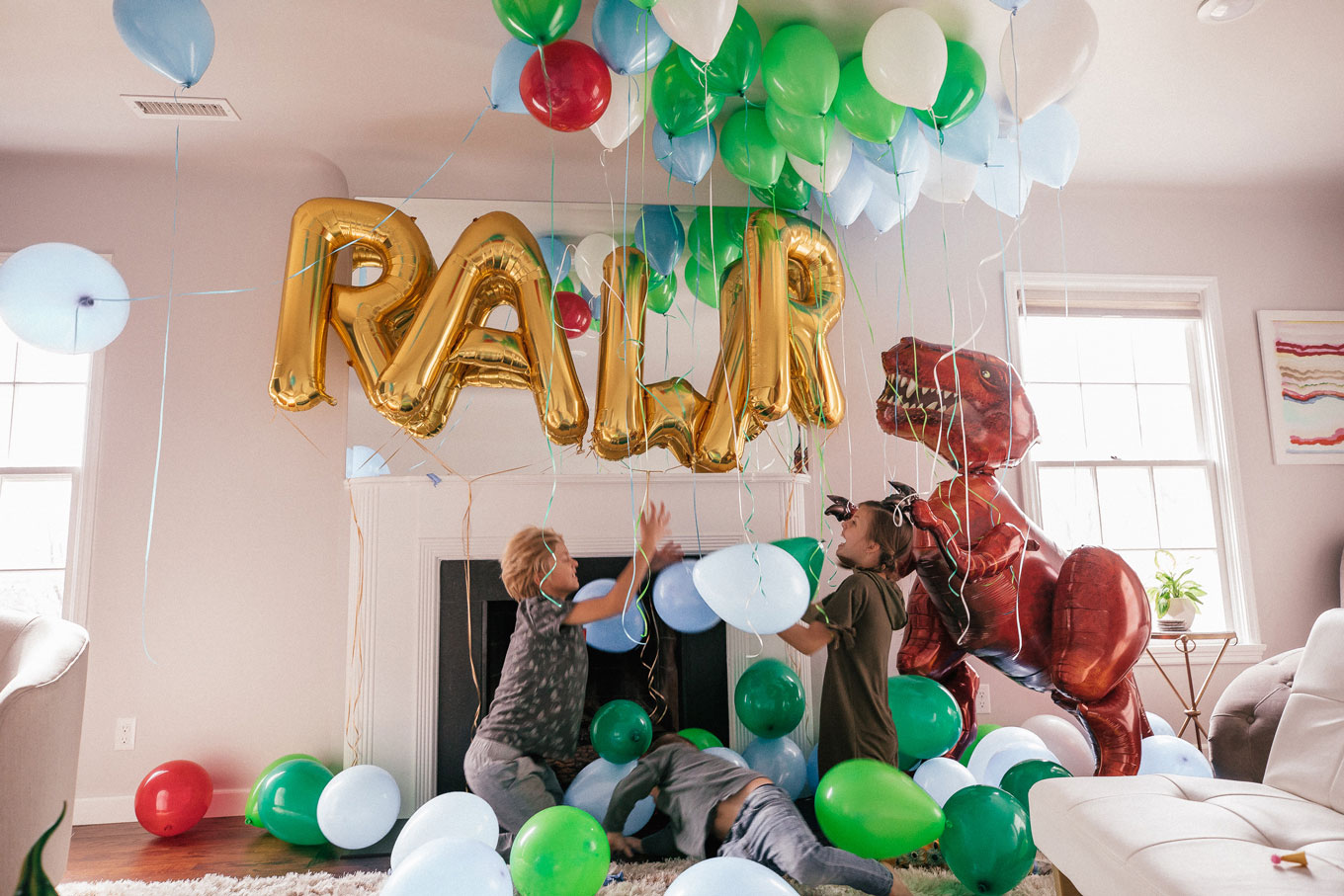 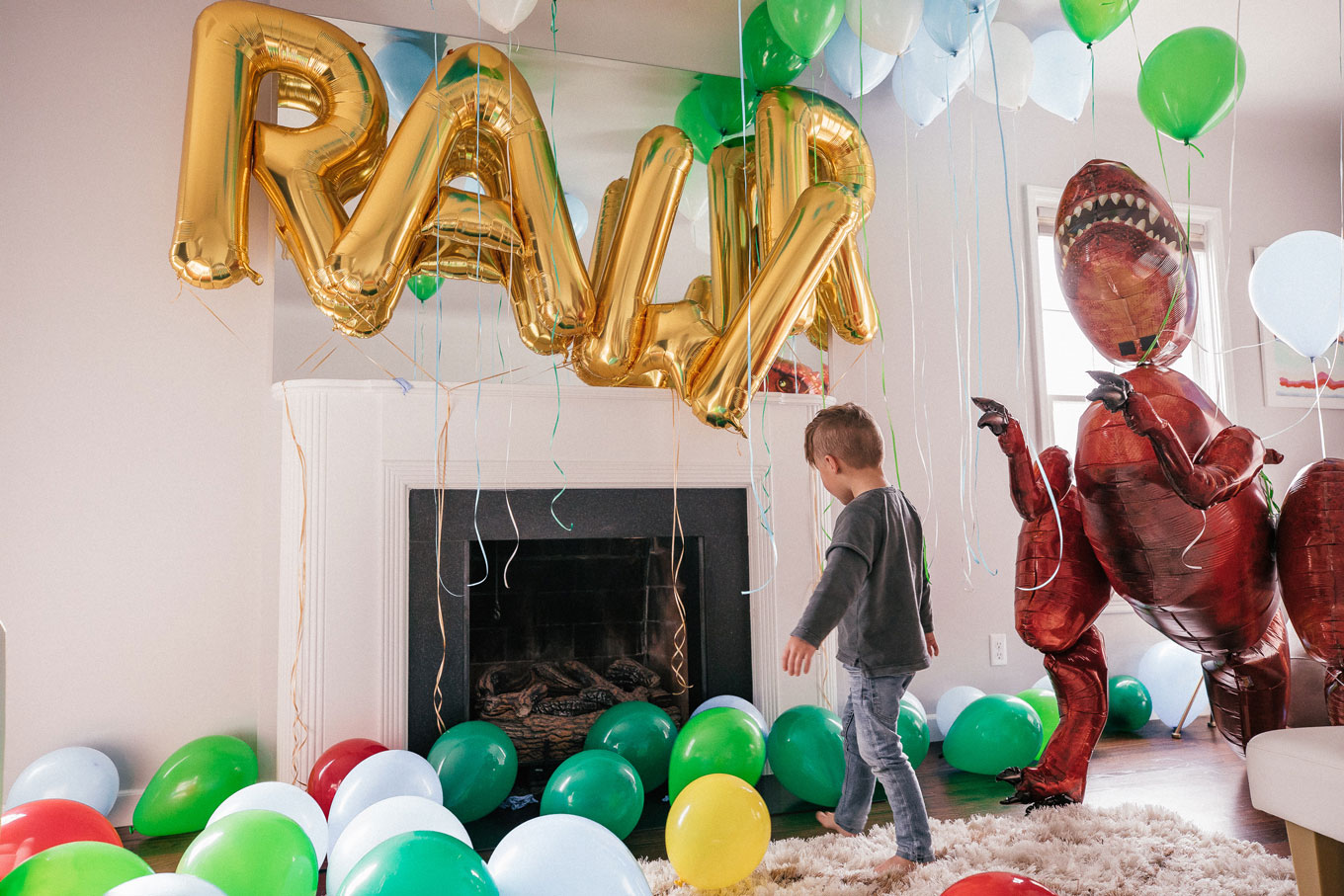 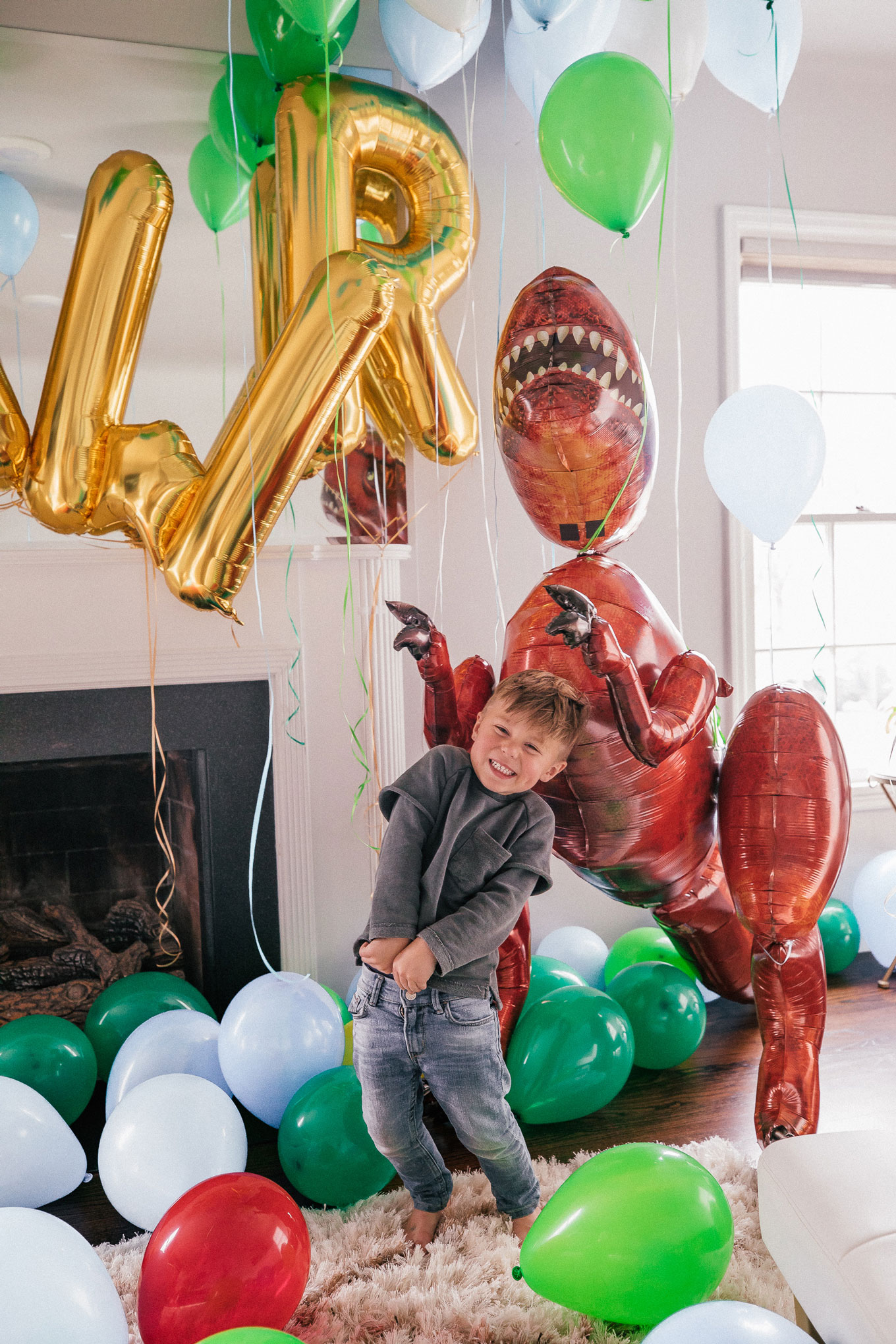 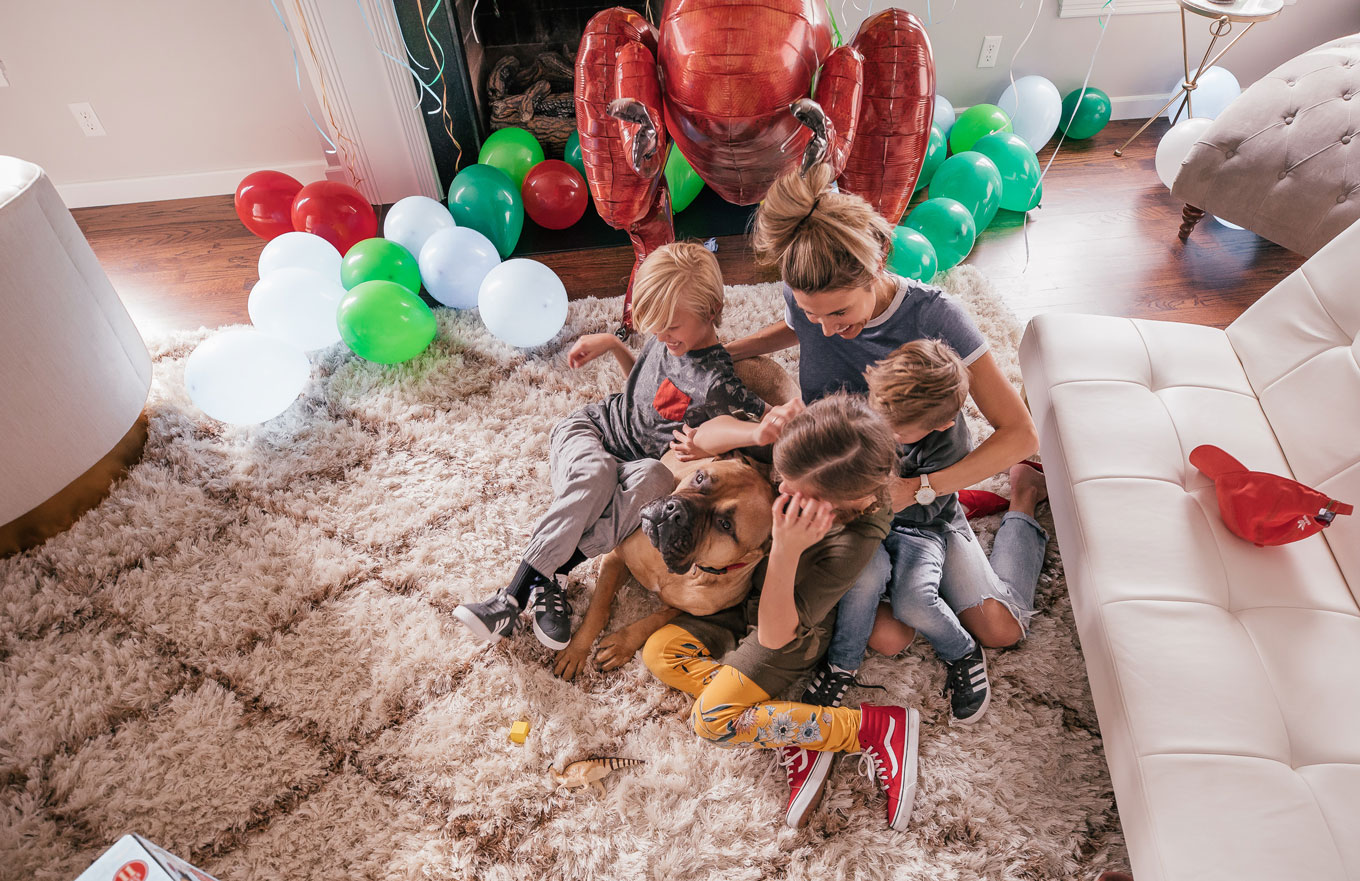 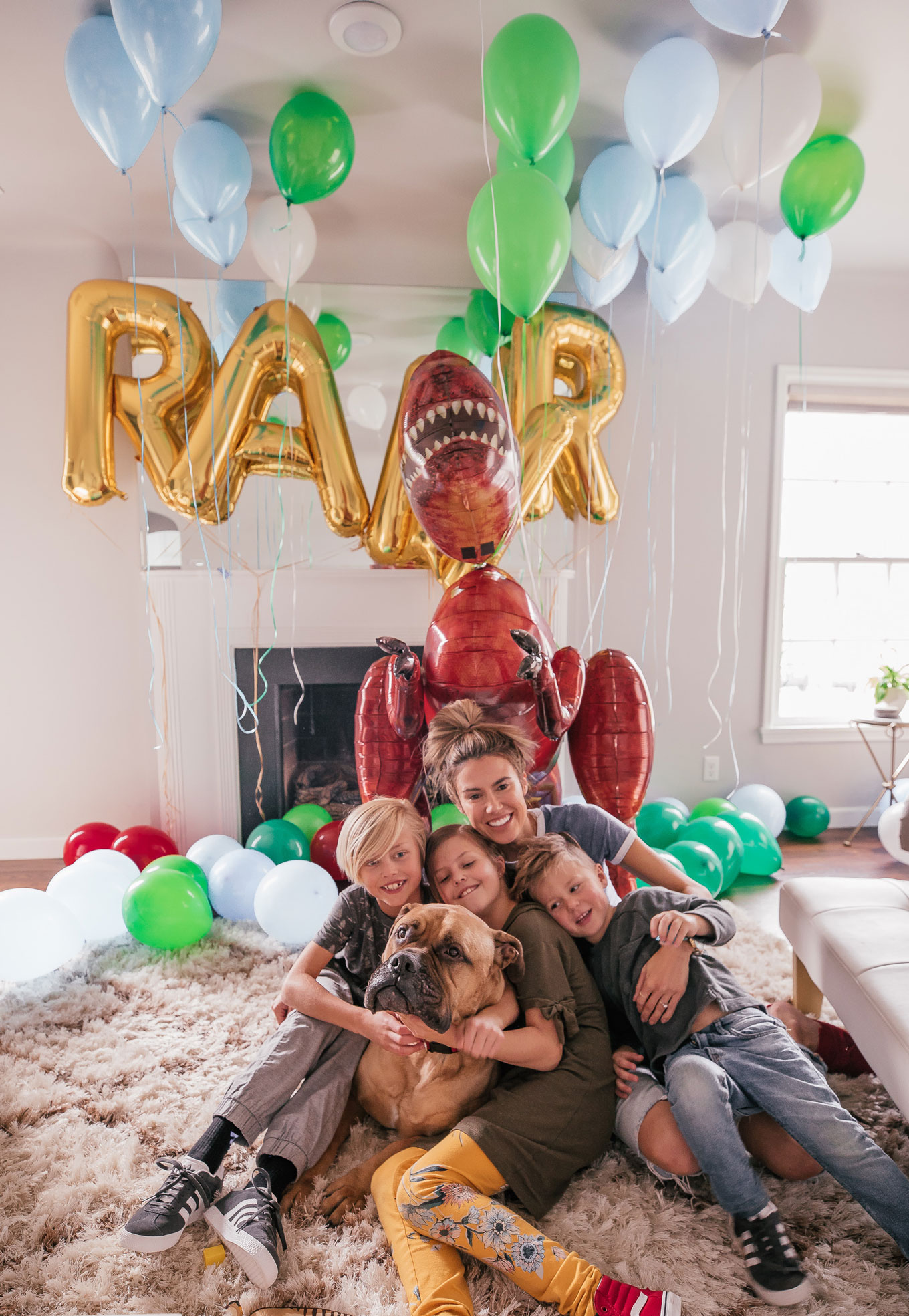 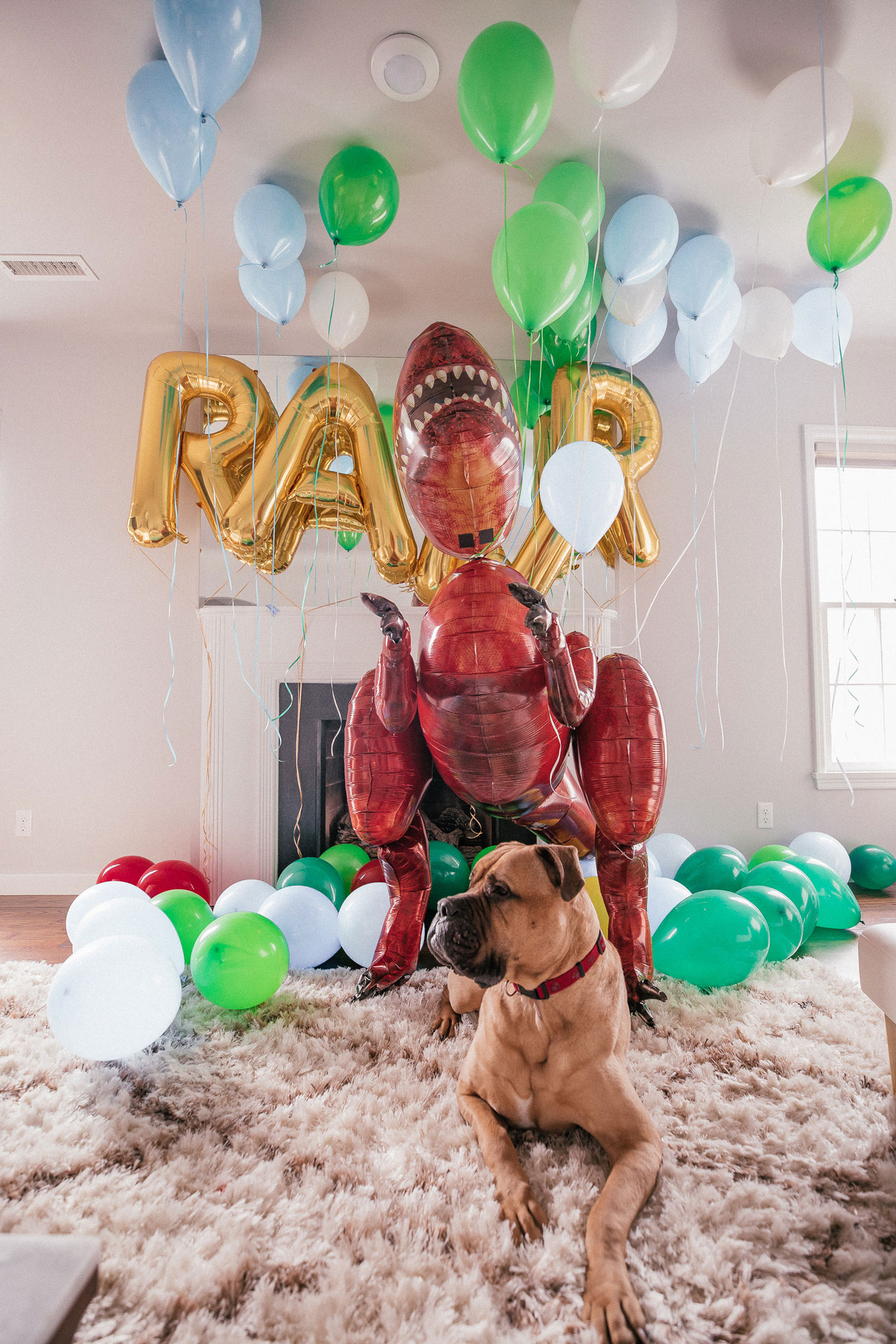 We were dying Mio would go sit right by the T-Rex like he thought it was his friend. I thought he was going to bark and freak out at it because he barks at everything bigger than him, but he was so mellow like they were buddies lol. 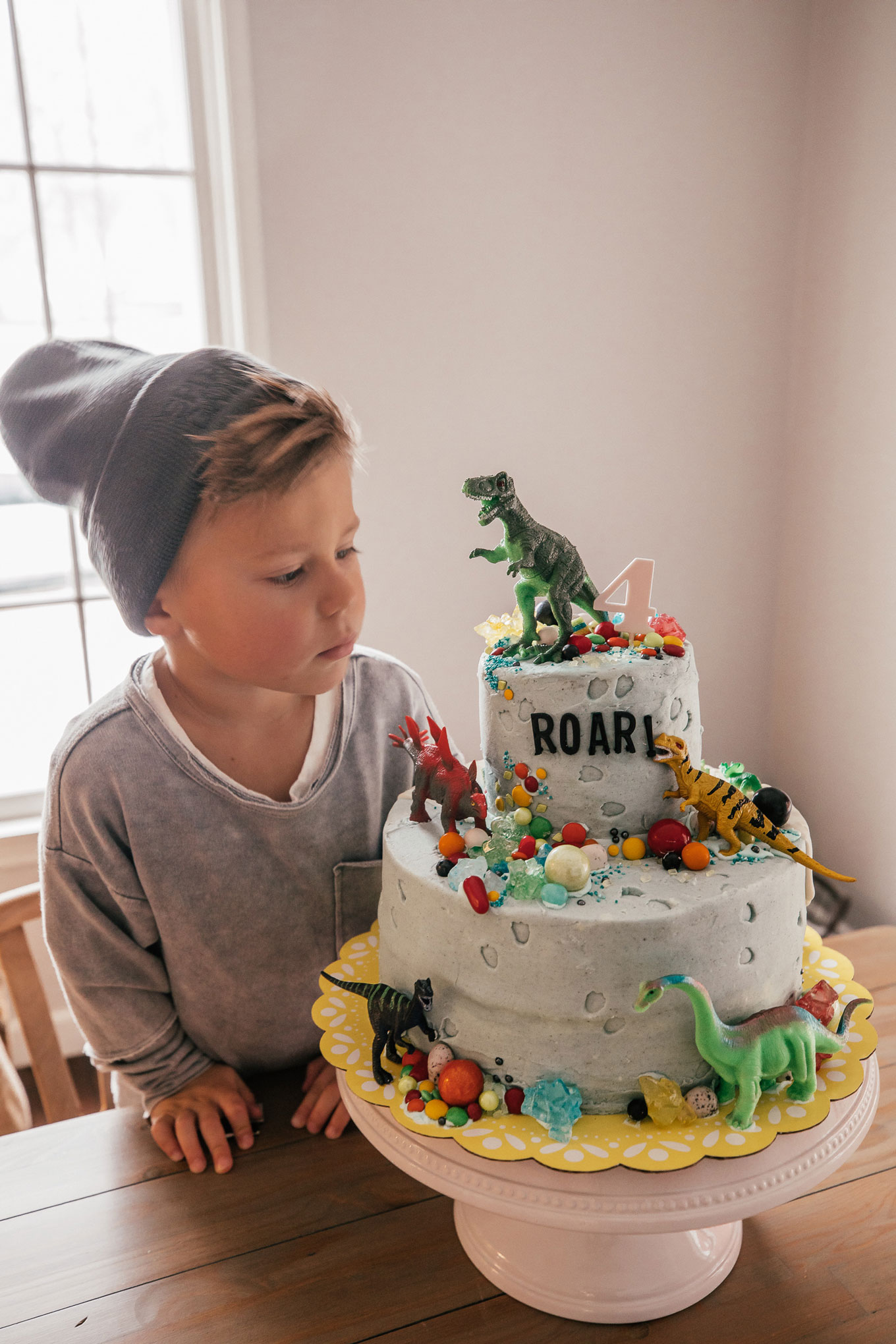 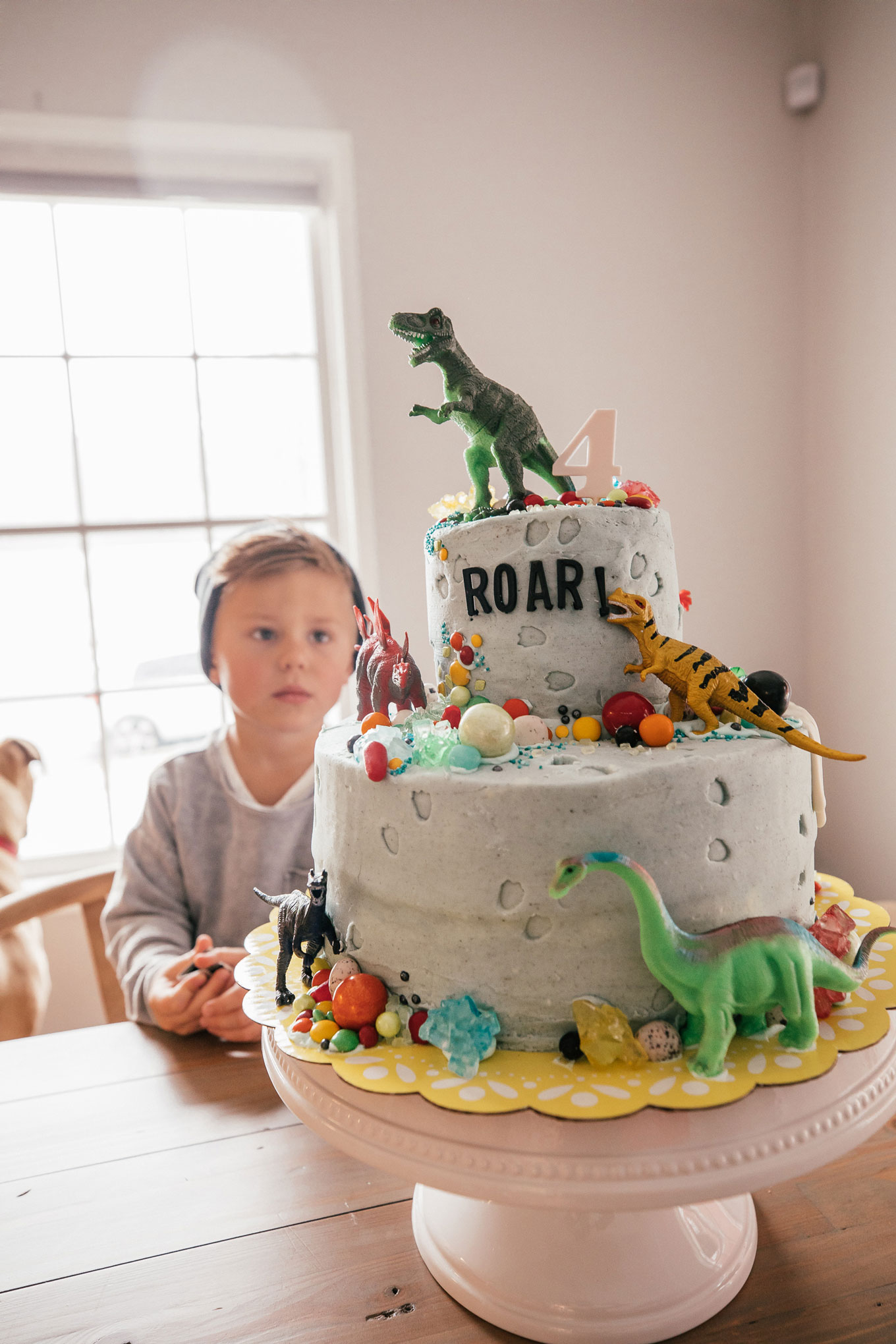 I was so excited how the cake turned out. My friend Megan who owns Sweet Tooth Fairy made the cake she is SO TALENTED! Beckam really wanted gum balls and hot tamales (his favorite candies) on his cake and she added them in such a classic way with out making it look cheesy. Inside the cake there was a layer of frosting and M&M’s (his other favorite candy). It was such a GOOD CAKE! 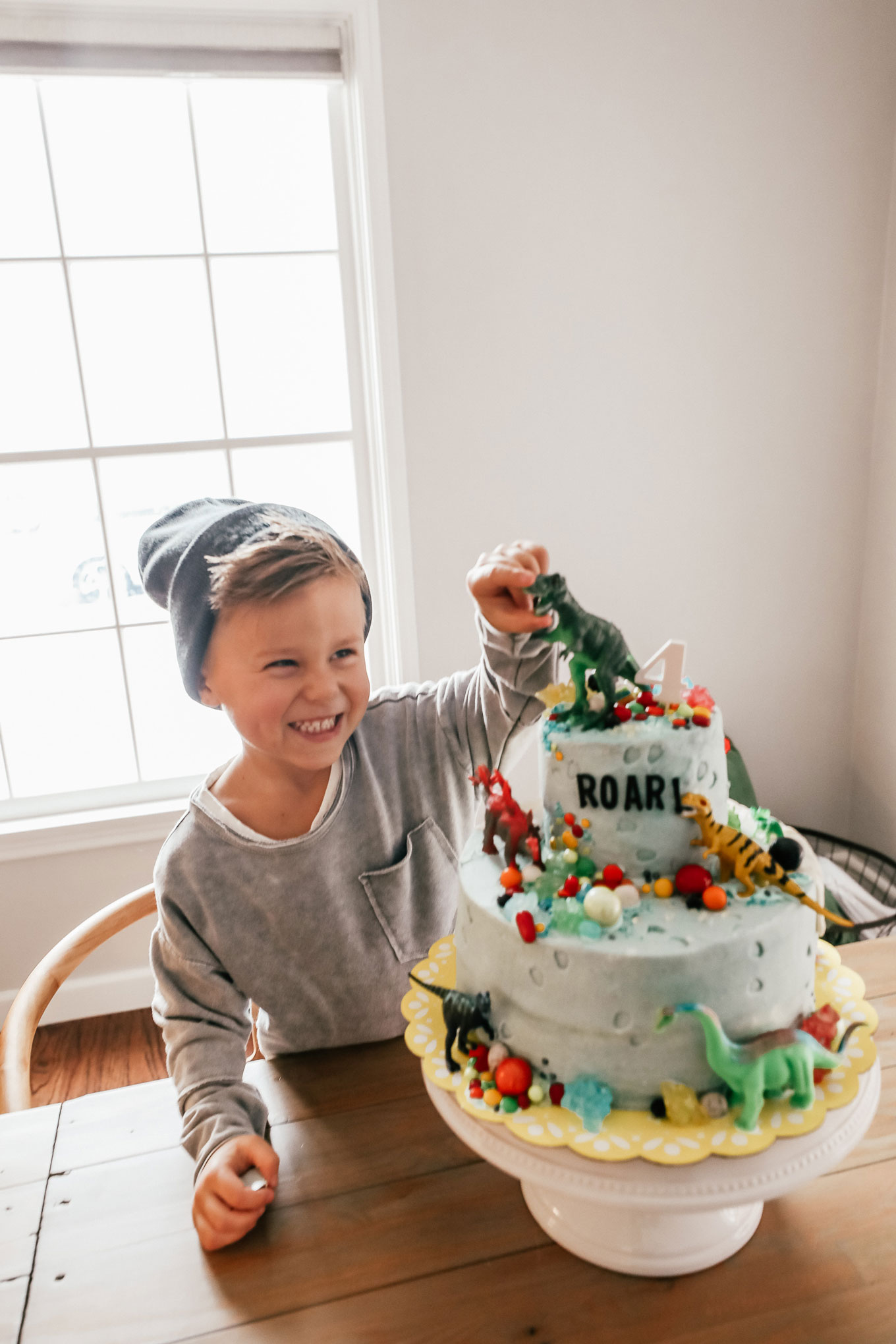 Beckam turned four last weekend!! I seriously can’t even believe he is four. I think I 100% write this every year , and I probably even say I can’t believe I am saying this again – but it’s really so crazy to me how fast it has gone. I feel like it’s official he is a LITTLE boy, not a toddler, not a baby, a little boy.

There are so many things I love about this stage, he is so independent, says THE FUNNIEST THINGS, wants us around all the time, super cuddly, he just honestly is like a mini best friend. I always tell Cody I hope he always wants to be around us, even though I know the stage will come when he’s a teenager and thinks we know nothing. But I just hope it magically maybe never comes 😉

My family came into town this weekend from Montana for his birthday. It’s always fun having them in town! And as you guys know Cody has a huge family, so our birthday parties are usually just family and we are still 25-40 people deep depending on if everyone is in town 🙂 We all went out to lunch at one of his favorite spots (Spaghetti Factory) and went to the trampoline park. He is obsessed with jumping! If you have a toddler boy you know what I’m talking about!

We filled the living room with balloons and the kids played for hours with the balloons. 🎈 Why are balloons fun at any age 🙂 We got Beckam a new bike for his birthday. He’s too tall for his strider bike, so all he wanted to do was be outside riding, but it was snowing!! So cold! So it was short lived. Ready for Spring so we can go play outside all day!