Today Beckam turns 2!!! I can’t believe how fast it’s gone and I didn’t even realize how much he has changed until a couple nights ago when I was making a highlight video of the last year. Last night he woke up crying in the middle of the night and I went in to tickle his back which usually puts him back to sleep and he just took my hand and said “mommy sit by you” (which means he wants me to sit by him) so I laid in his little bed and held him tight feeling so thankful for all the joy he brings to our lives. 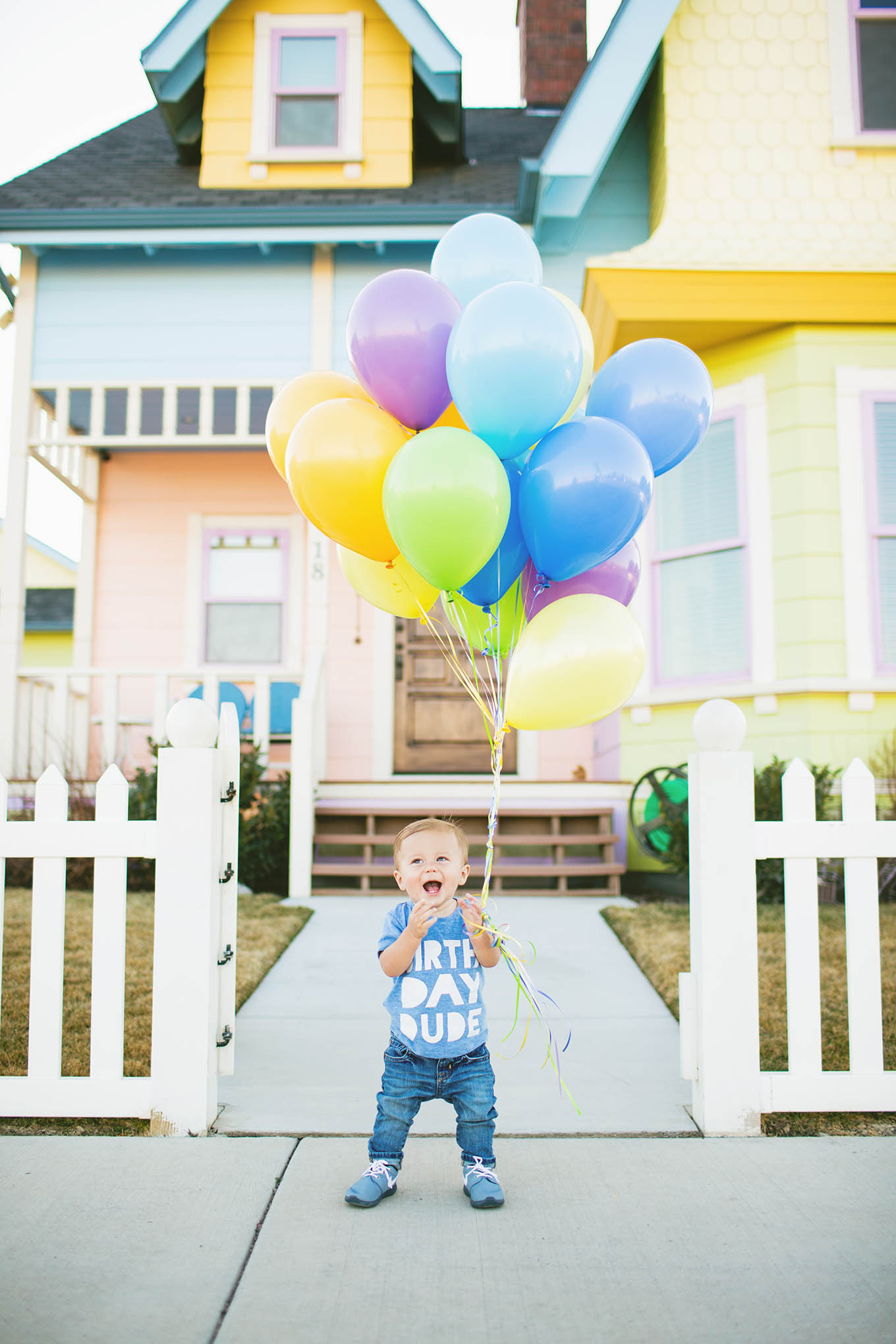 His 1st birthday last year we did an UP themed shoot and this is still one of my favorite pics.  (Birthday dude shirt from ILY COUTURE here) 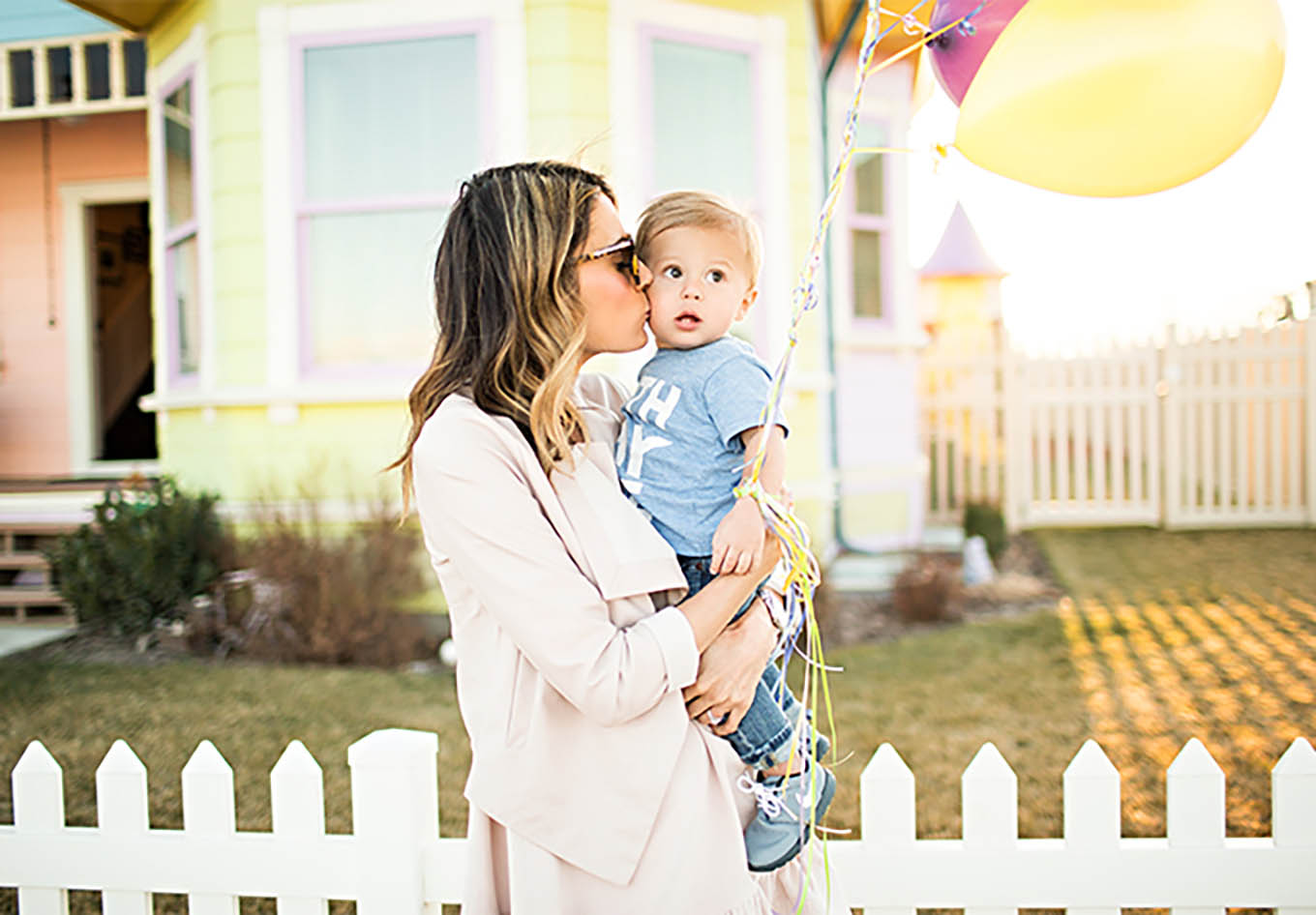 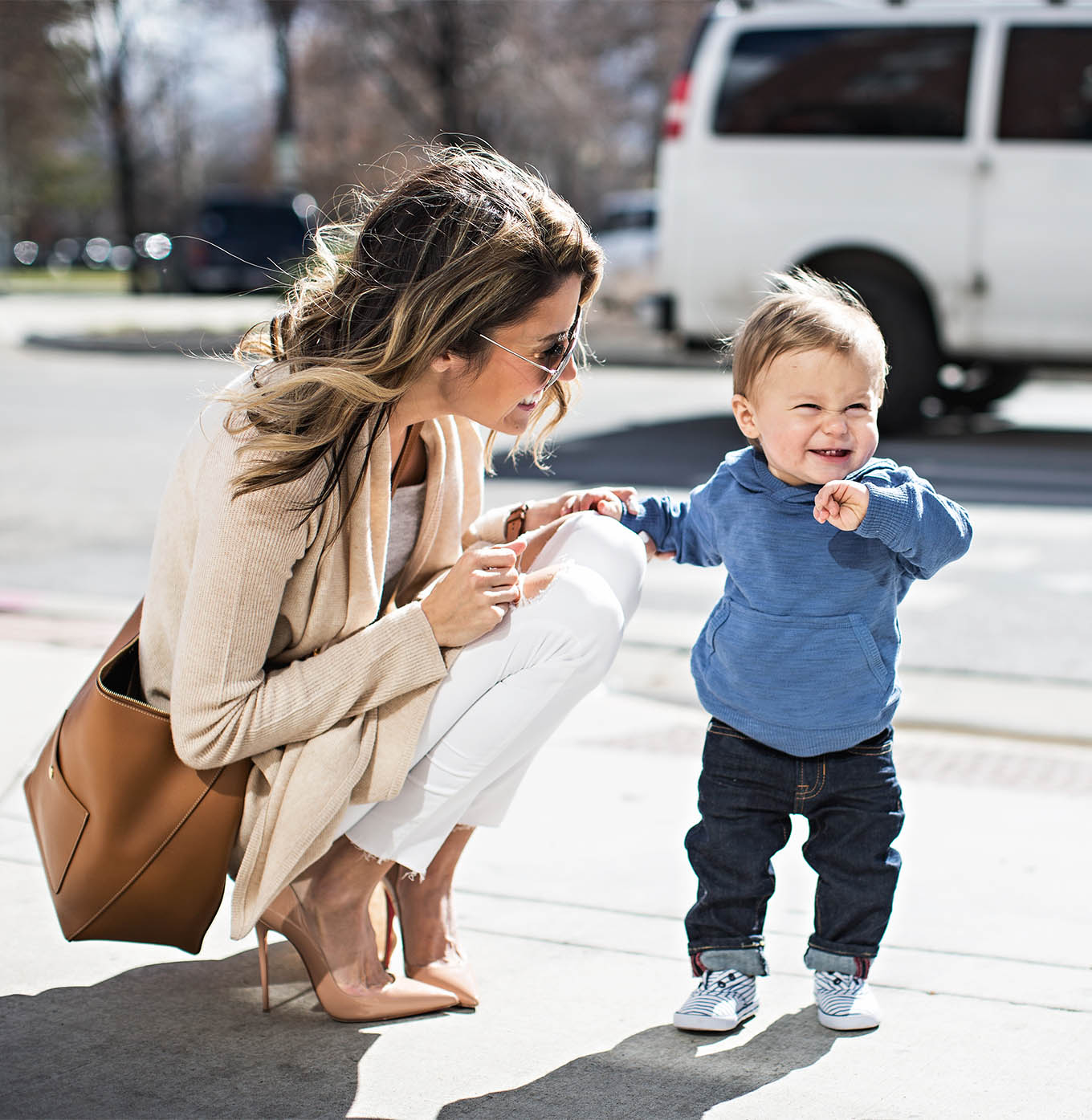 That little tooth grin and those chubby cheeks!!! 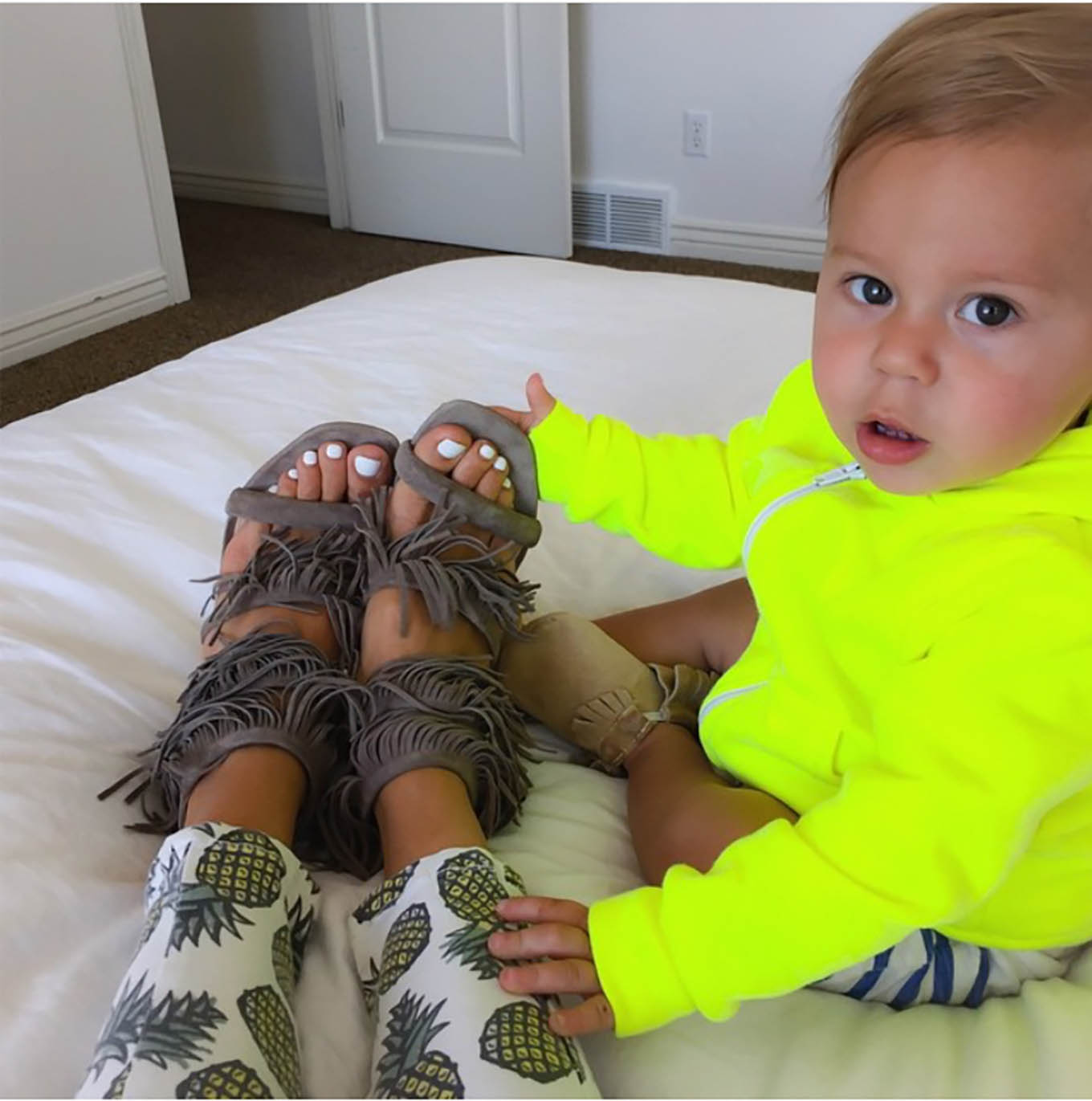 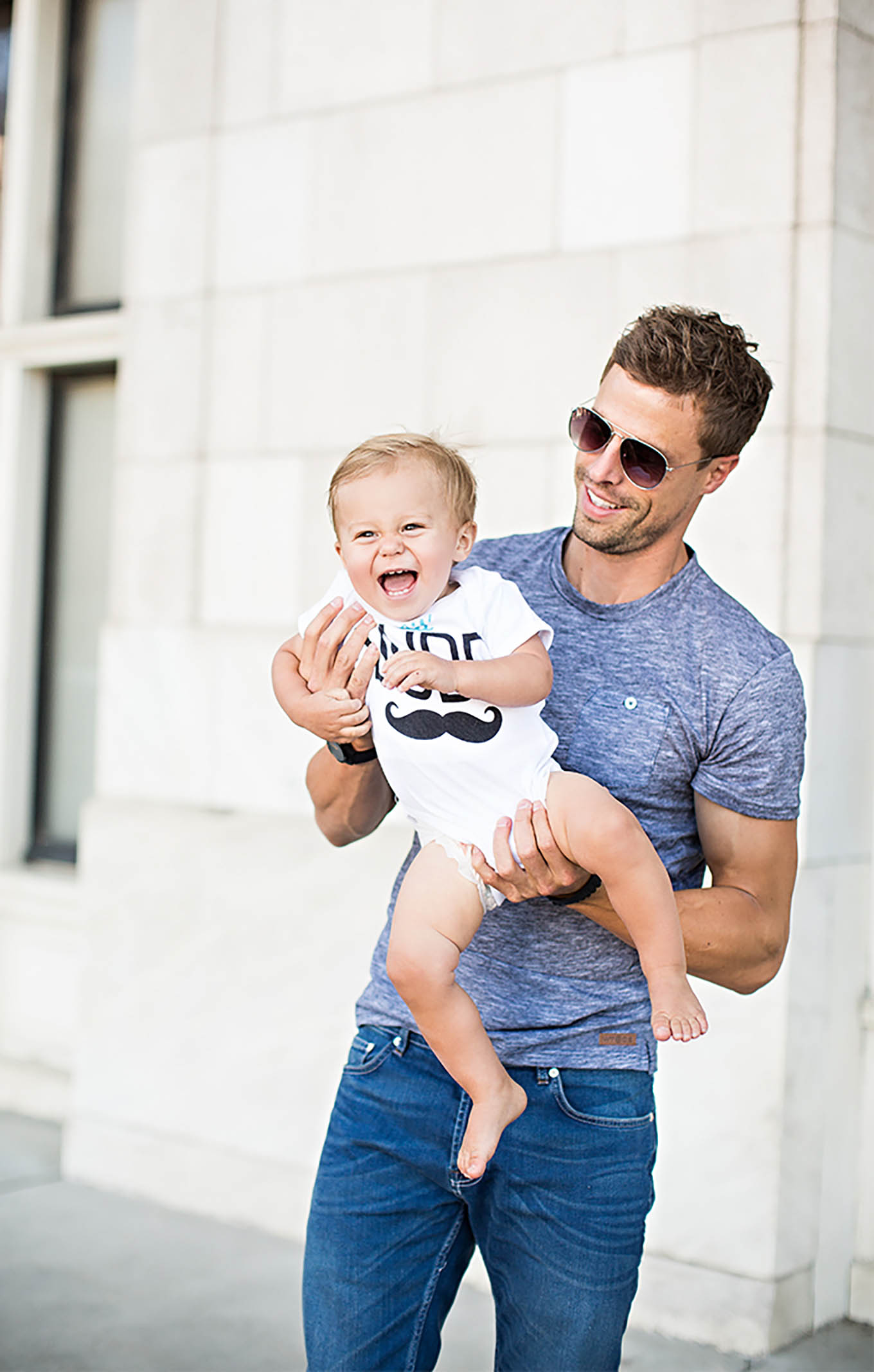 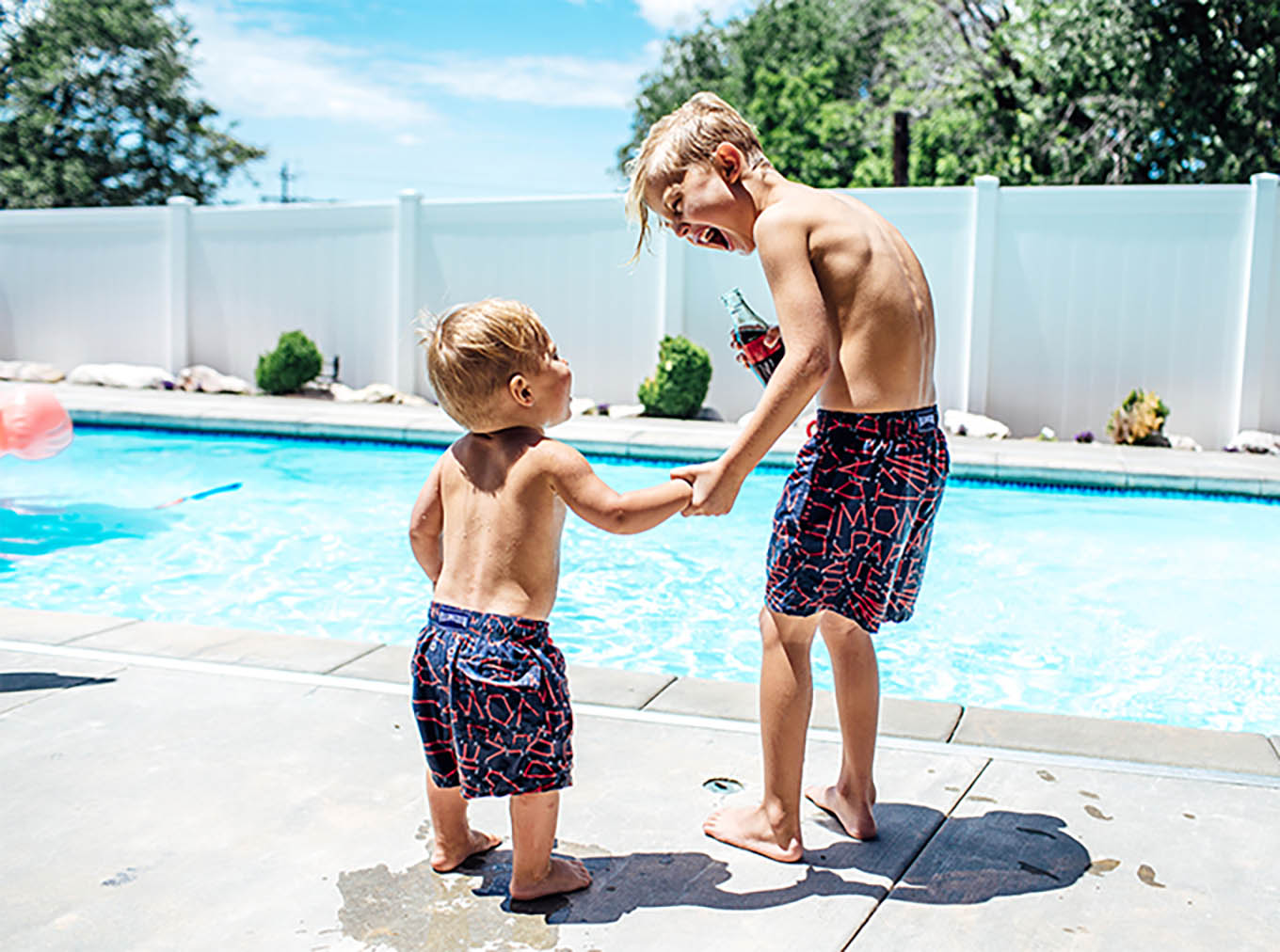 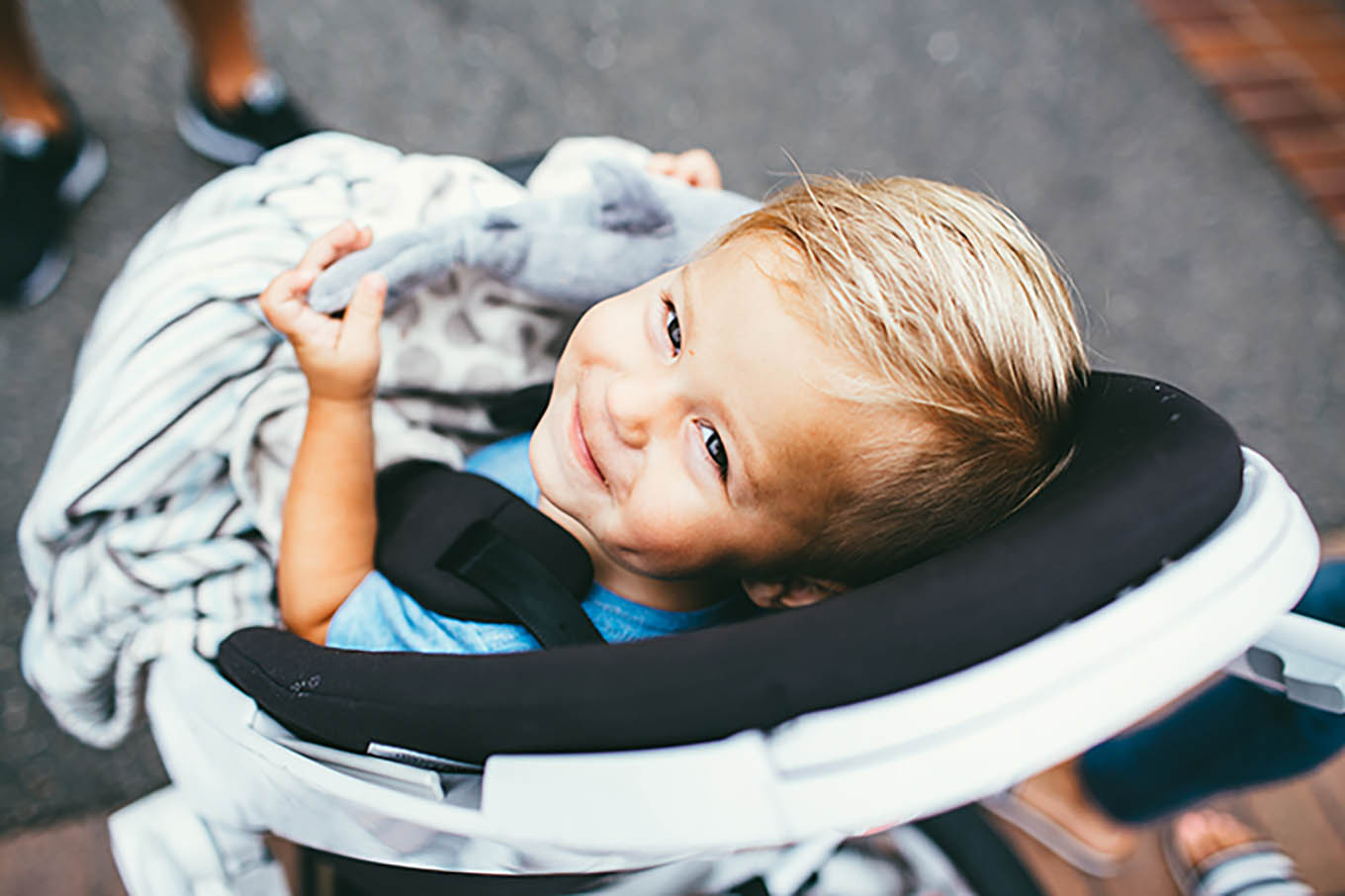 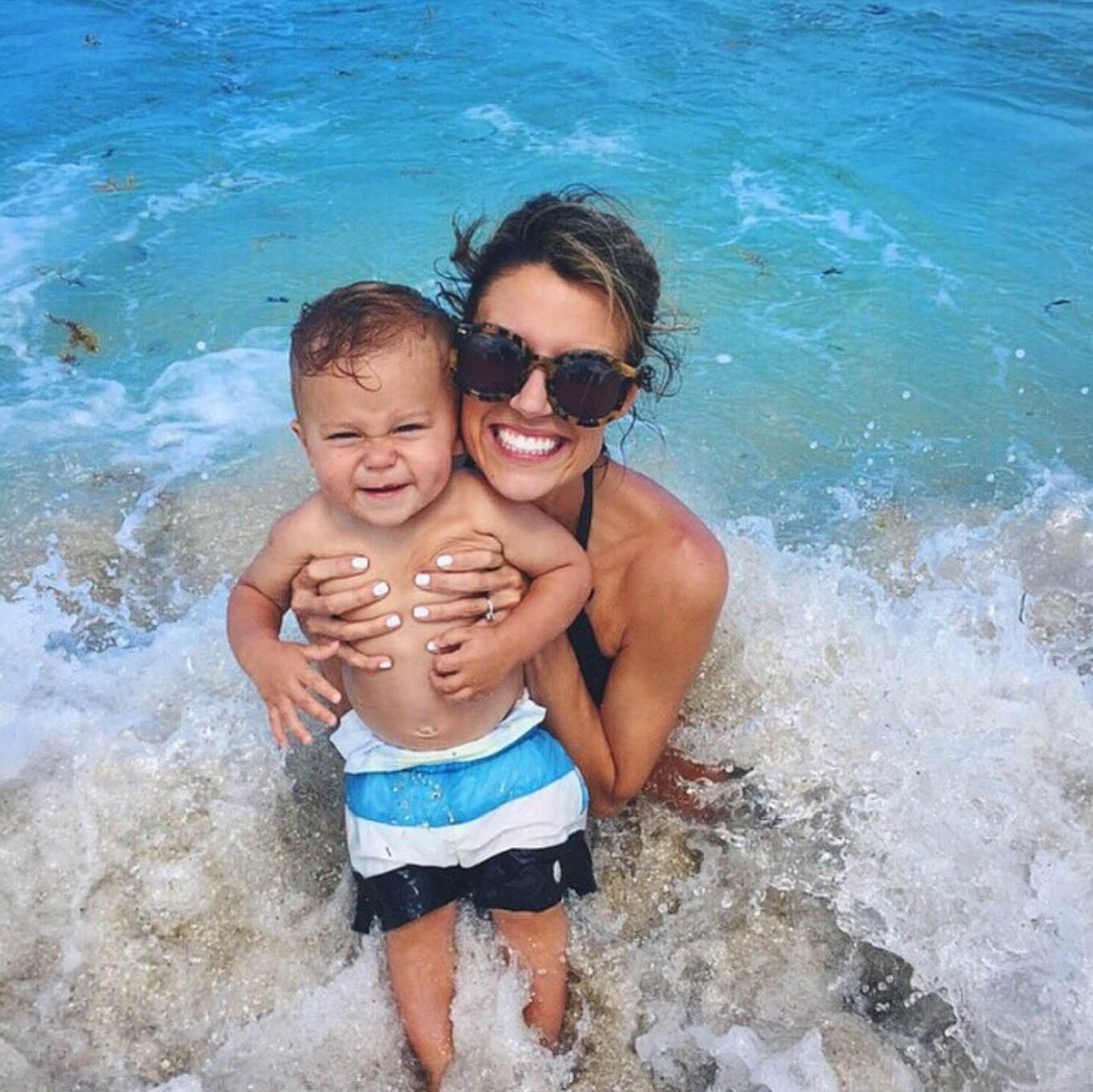 When I was little my Dad used to take me on a father-daughter trip every year. I wanted to create the same tradition. When he was 6 months old Beckam and I went to Paris, and then last year we did our Mommy-Son trip to Miami. Miami was one of my all time favorite trips (even though getting home was a complete nightmare!) I still look back on that trip as one of the closest times I’ve felt with him. 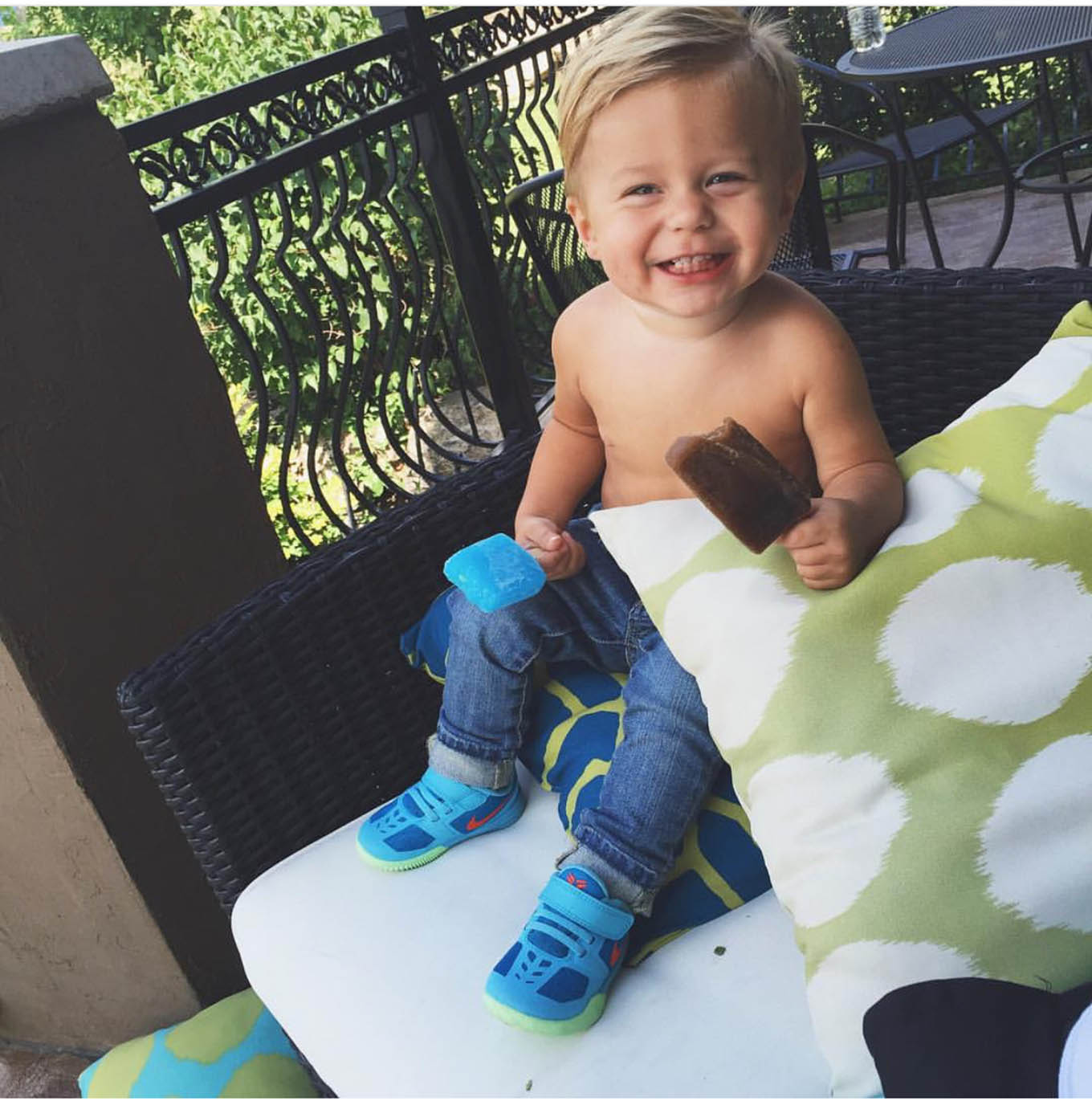 Beckam has a major sweet tooth! Popsicles and peanut butter M&M’s are his favorite but really anything with sugar he will follow you around until you give him a bite. He loves peanut butter so much he will eat spoonfuls straight from the jar (Cody and Wes taught him that one 🙂 His second favorite is strawberries and apples. 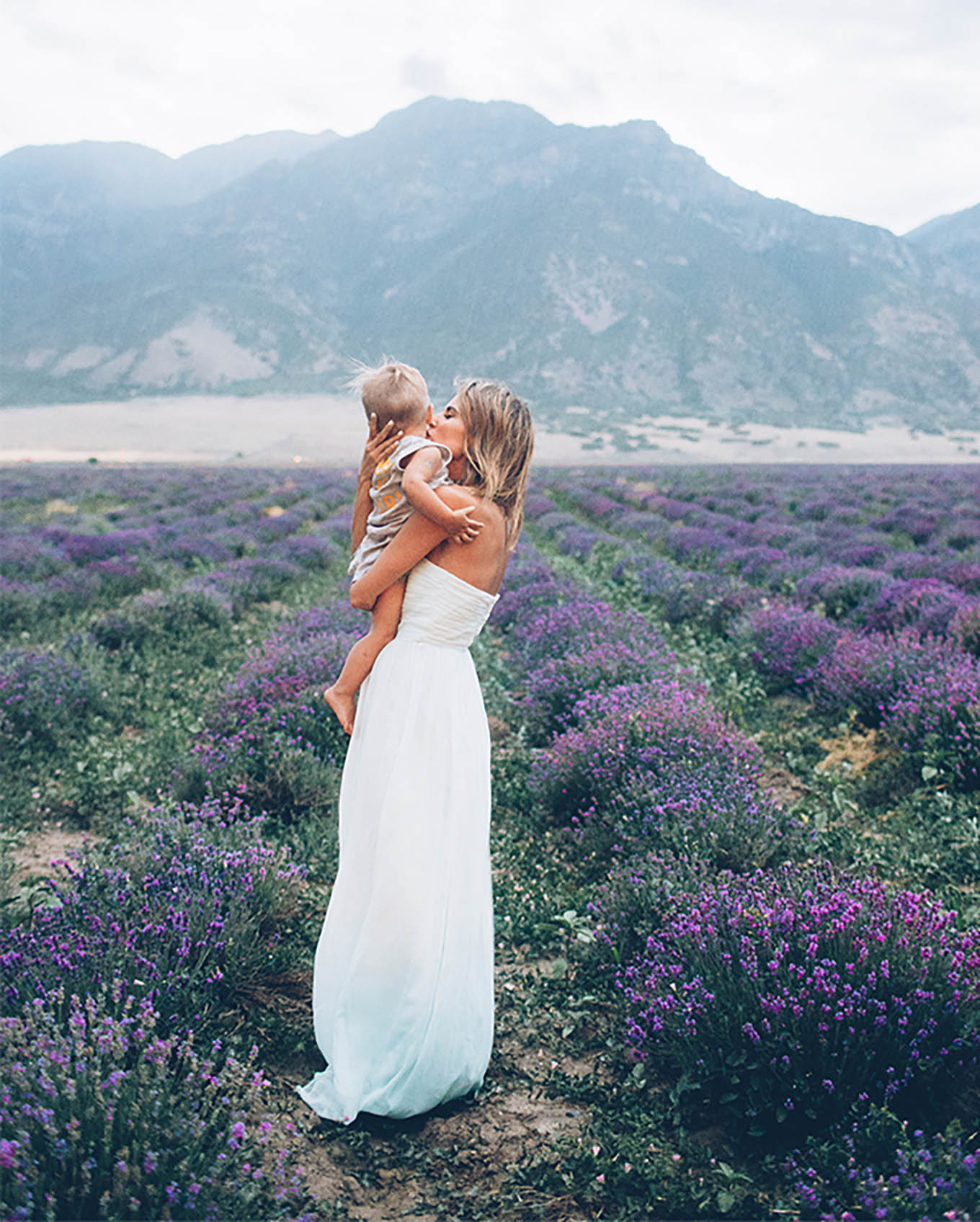 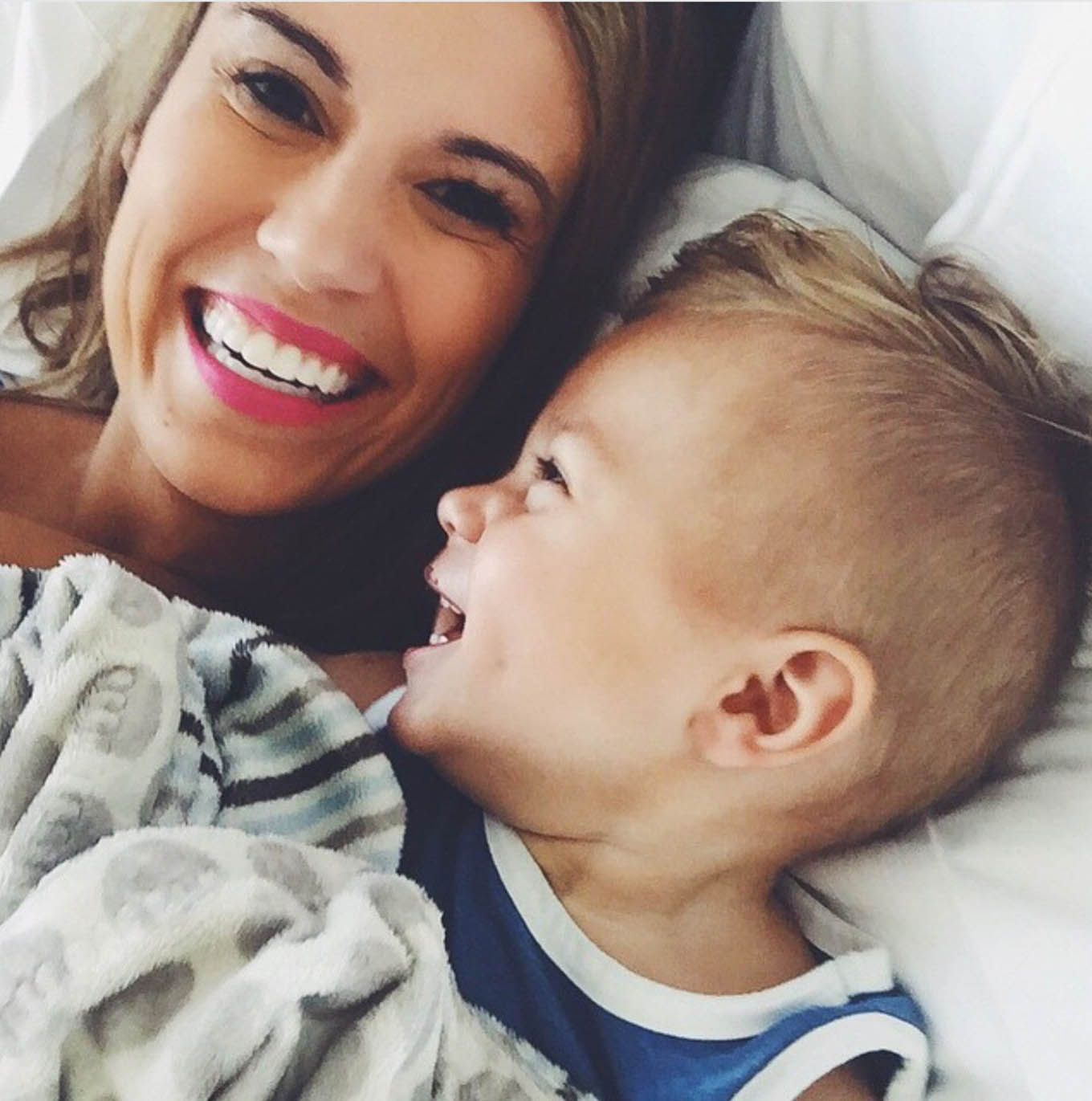 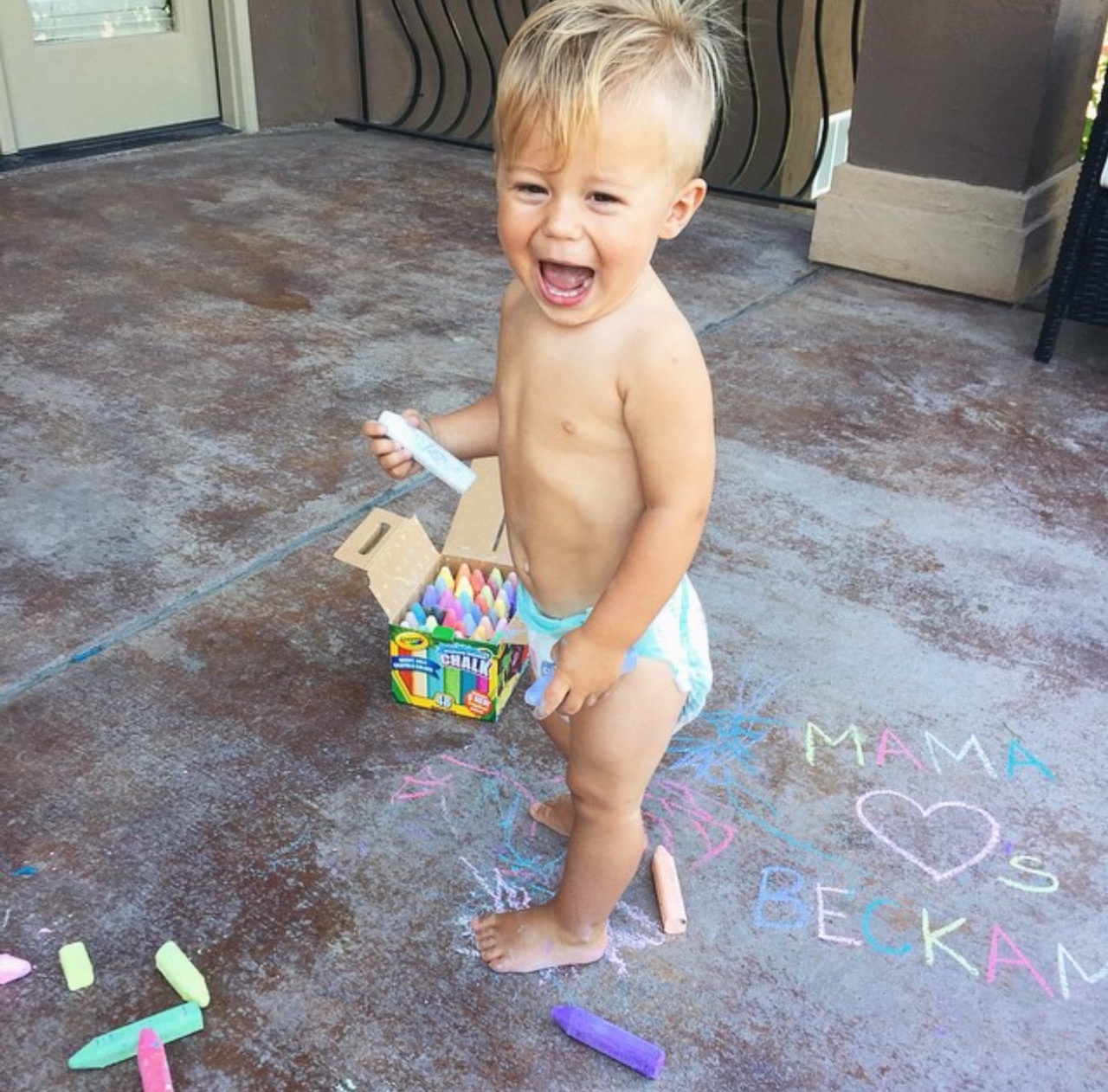 He would live in his diaper if I let him! Even if it’s freezing out he’s trying to take his shirt off. Diapers and sneakers are his outfit of choice 🙂 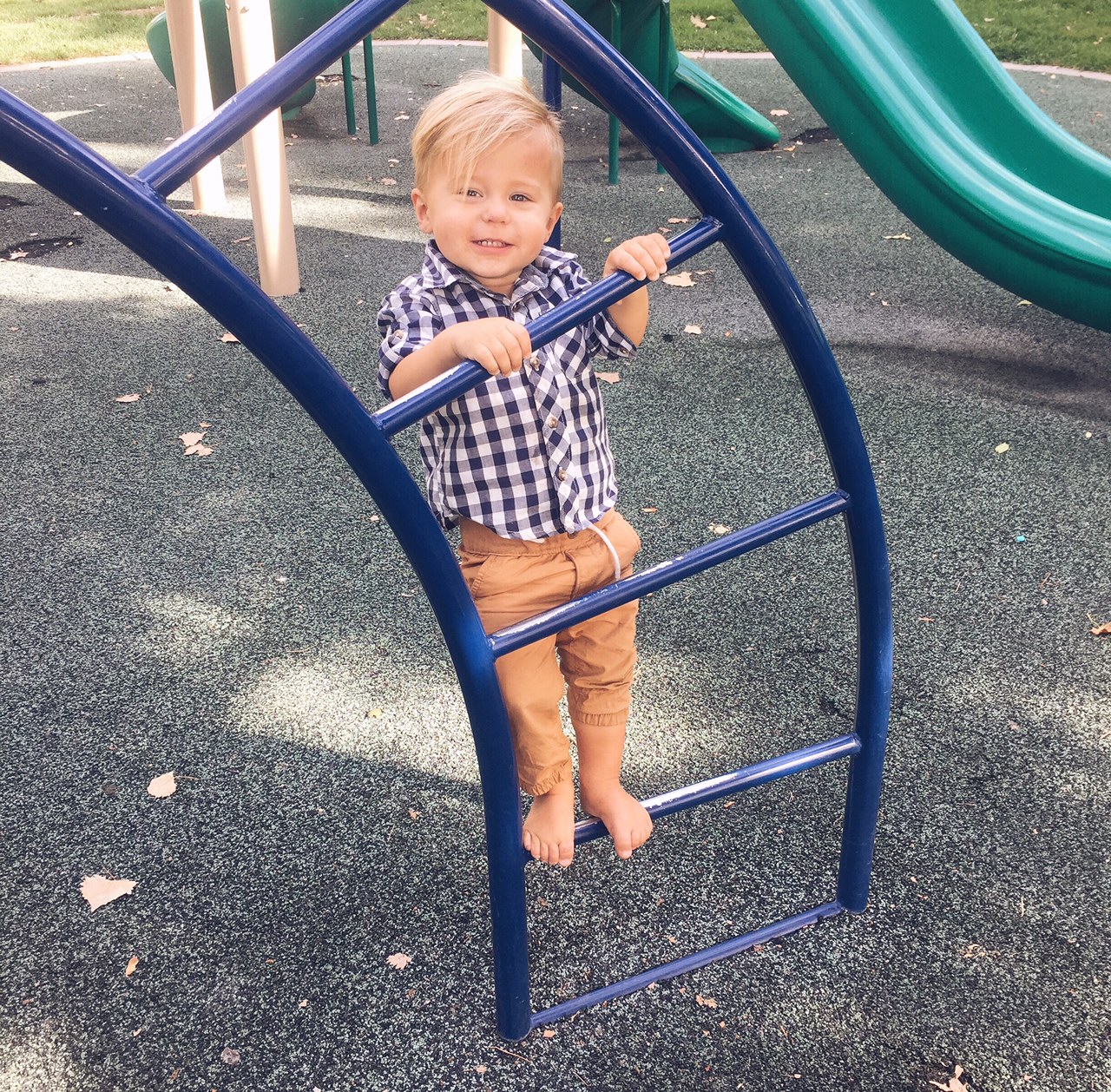 I think like every other kid the park is one of his favorite places. The swing was my favorite growing up I have vivid memories of my parents pushing me, but B could care less about the swing lol. He goes straight for the slides and whatever else he can climb up 🙂 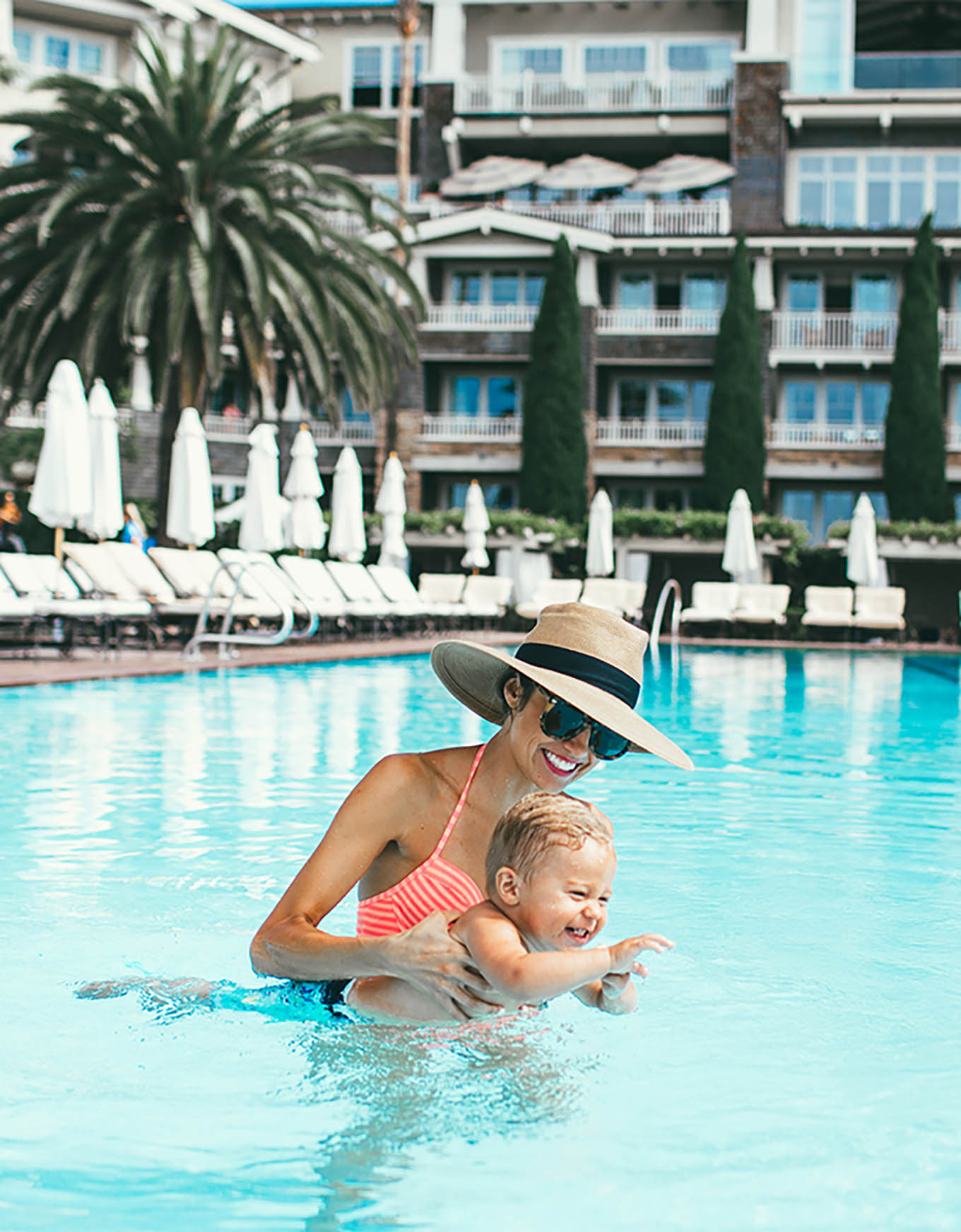 This kid could live in the ocean or pool, he loves the water and some of my favorite memories with him this year are seeing his face light up as we played in the ocean. (on the opposite end for as much as he loves water he freaks out when it comes time to rinse his head during bath time – I don’t get it 🙂 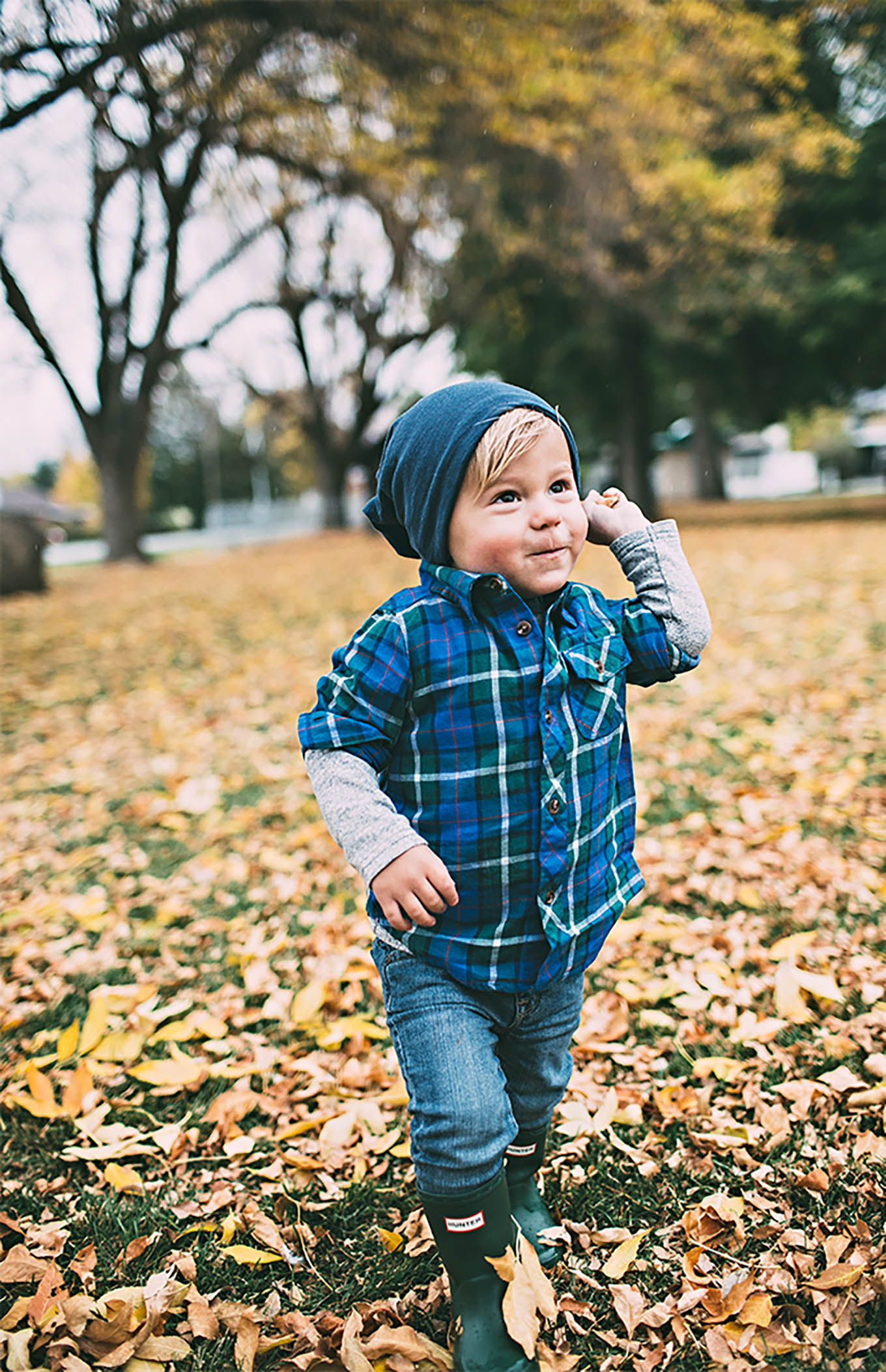 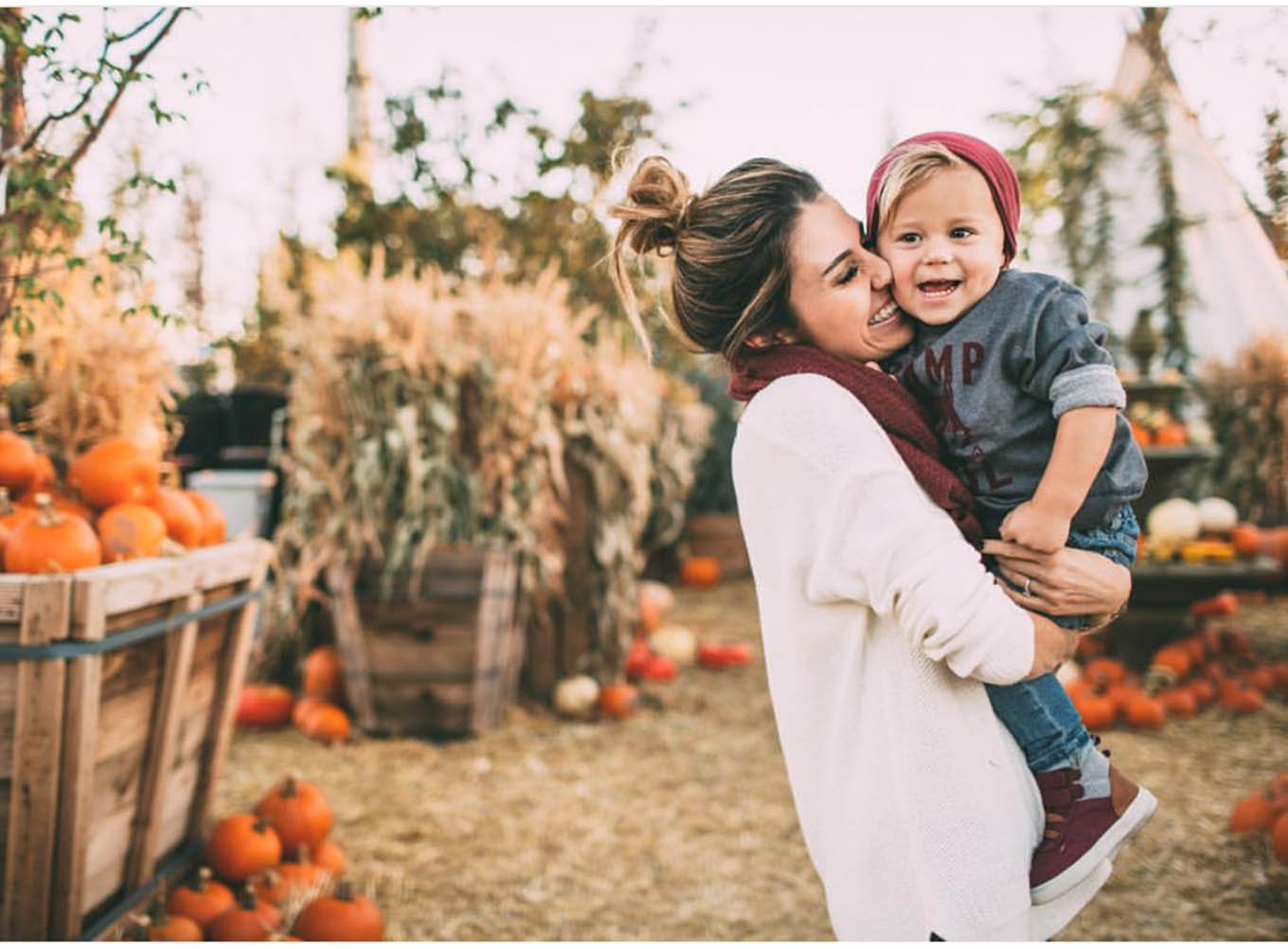 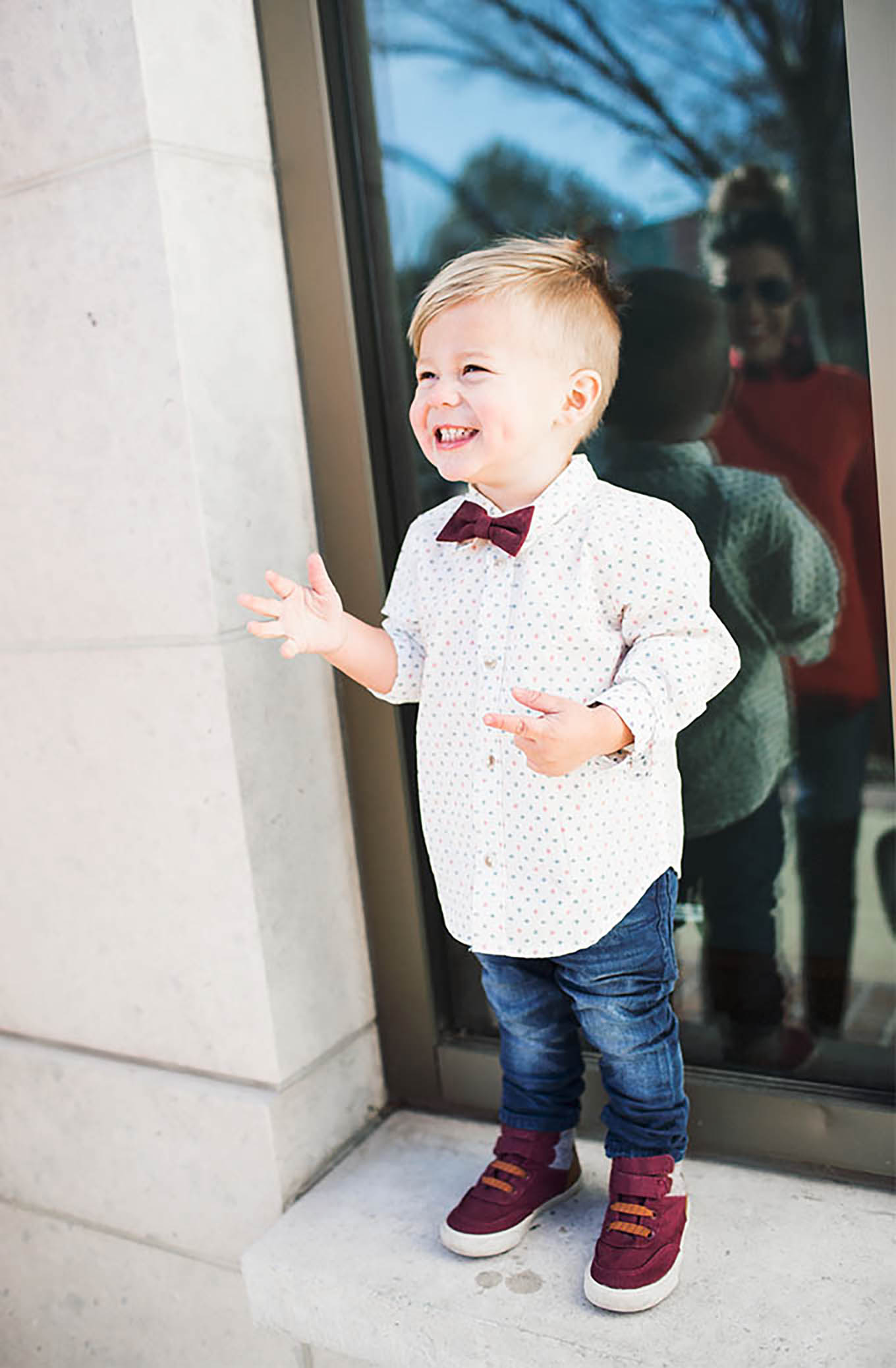 When he was about 18 months-ish he he was taking a bath and I was brushing my teeth by him and he yells OH NO MOM! OUT! I looked over and he had pooped in the tub lol. It was the first phrase he put together and I started laughing so hard. He just kept yelling POOP! OUT!! MOM OUT! I got him out as fast as I could but I was crying I was laughing so hard. 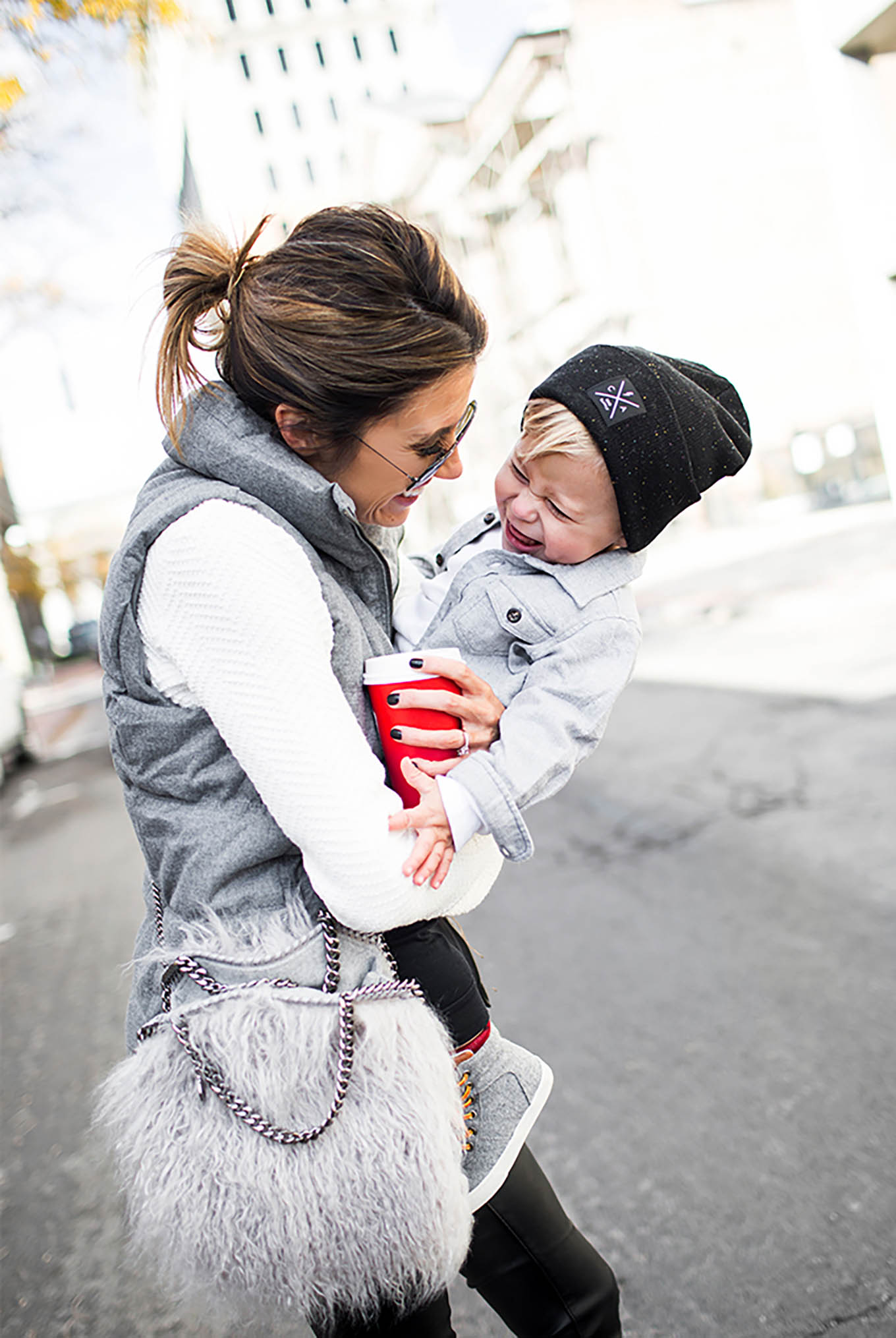 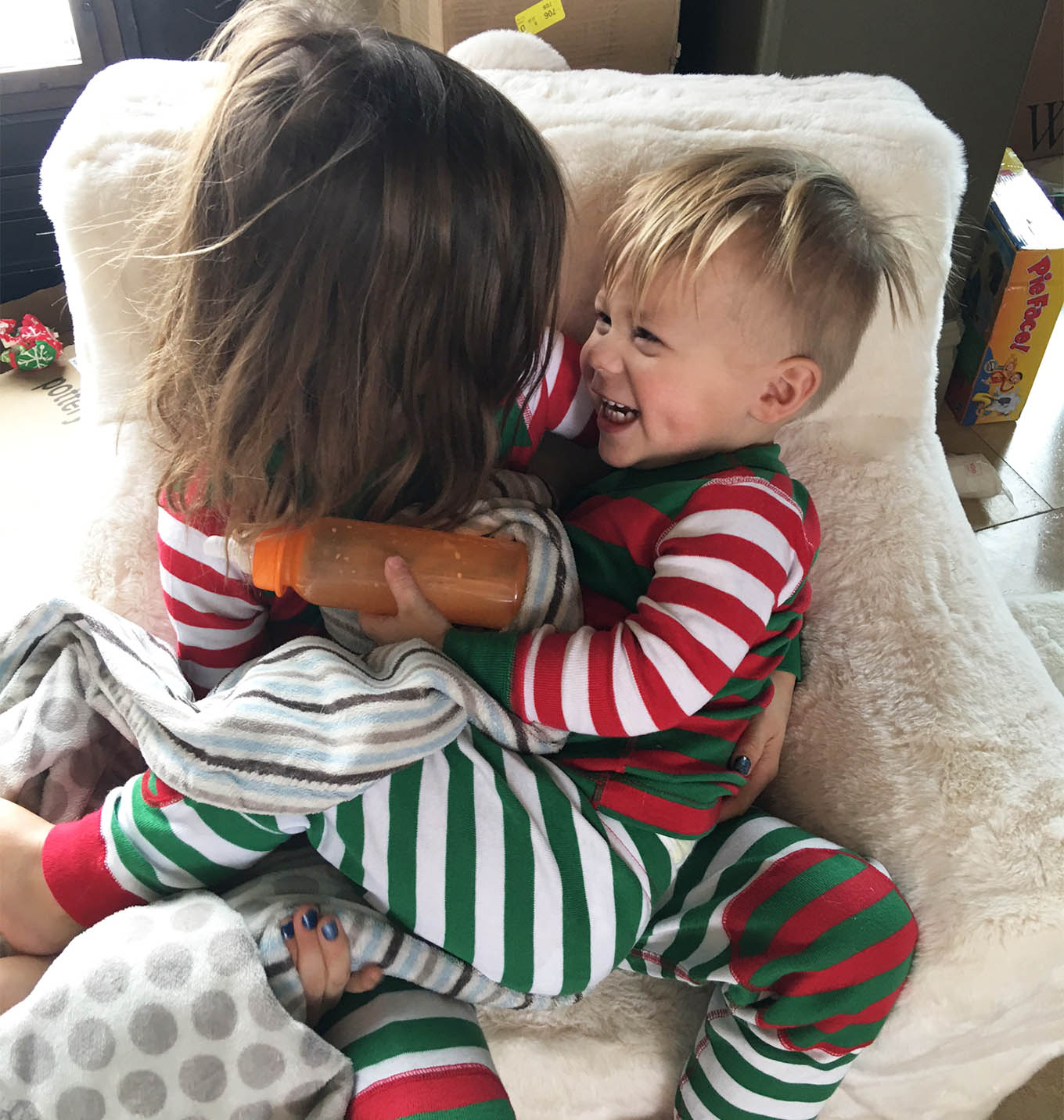 His favorite spot in the house other than Mio’s bed is sitting on this chair with Mara. 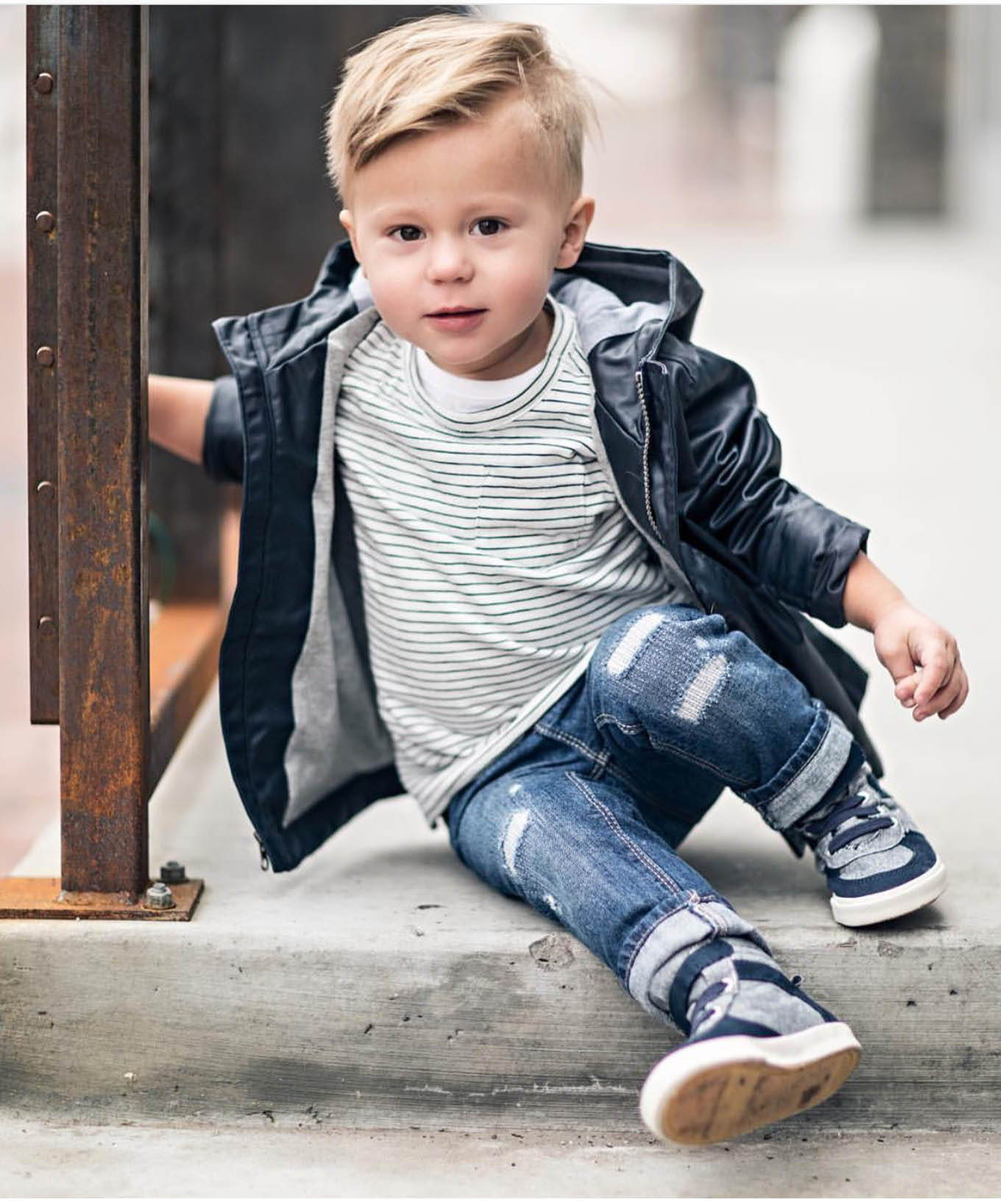 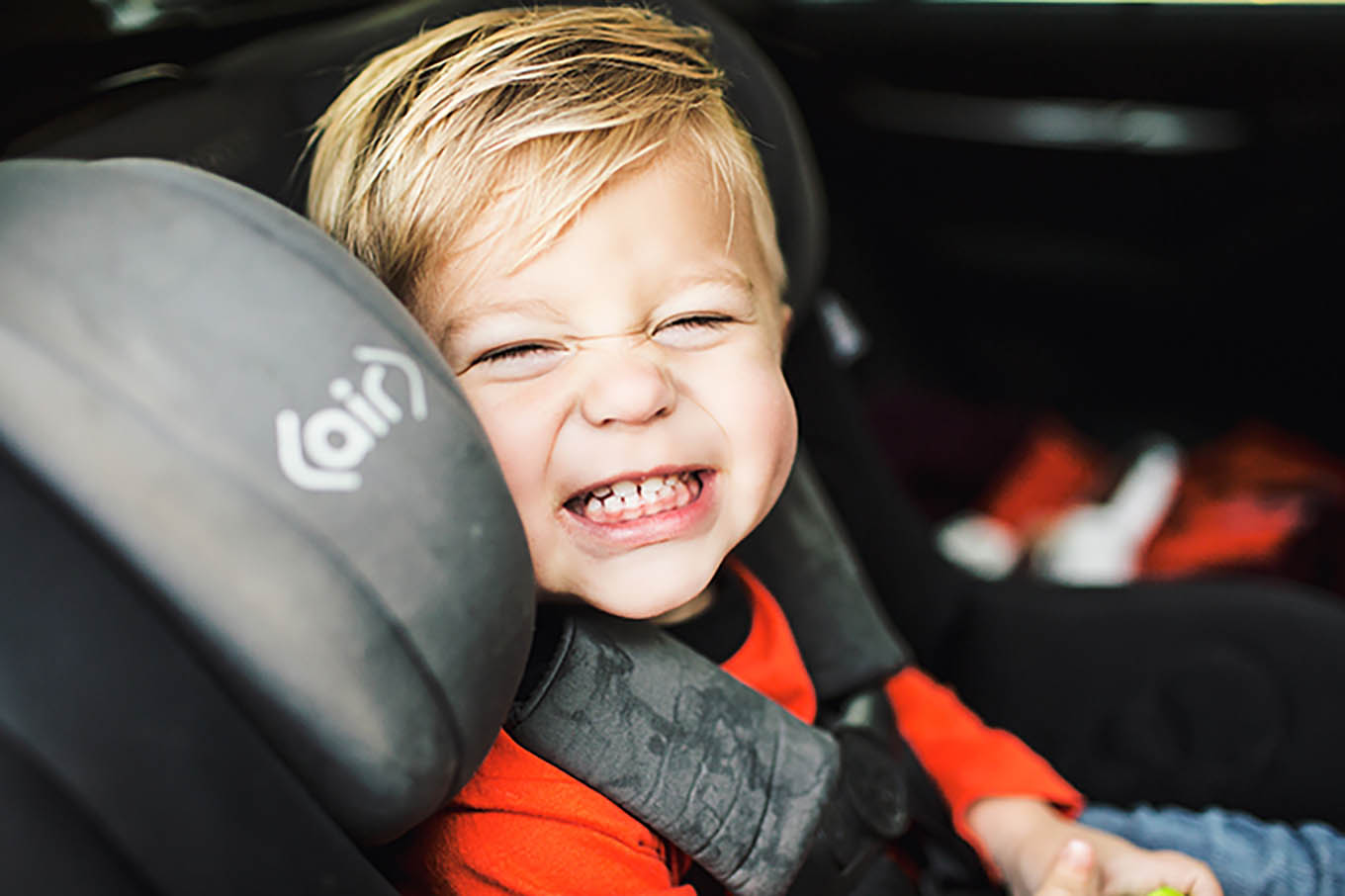 HIS FAVORITE THINGS AT 2: Beckam always has a car in hand, before he could talk he was making vroom noises with his cars, and now it’s “Mom watch! Mom!” as he does crazy jumps with them in the air. I love finding his little matchbox cars in my bed from our morning cuddles, or stacked on my nightstand, or hidden in my shoes. He loves to throw things in the air, balls and balloons especially. He makes this cute little noise every time- I don’t even know how to type it but it’s the same exact noise every time he tosses something in the air. His blanket goes EVERYWHERE with him. I have to wash that thing multiple times a week cause he drags it in the dirt, bites on it, spills food, it goes everywhere. He is obsessed with his dog and his brother and sister. He lights up and yells their name every time he seems them.  He is a little bunny! From the stairs, off the bed, off the couch, he loves to jump off everything and anything! He is obsessed with Bubble Guppies and Team Umi Zumi. He loves music! Anything that has a beat, he will dance the second he hears the music start and it’s the cutest thing in the world. His arms go up and he drops his bum low and sways back and forth. His favorite color is yellow – and he loves when we are reading books pointing to anything yellow! But he says it “ellow”.

From 12-18 months he was the smiliest kid ever. Everyone always comments what a happy kid he is when we are out and about, now as he’s gotten older he is still super smily but it’s accompanied with his strong willed attitude which results in some hilarious faces when he gets in trouble. He 100% knows when he is in trouble. We will sit him in time out and come back after a minute and half the time he says no and will still sit there until HE WANTS to come out. He is so stubborn and I know it’s from me lol.

He has always been such a good sleeper! Last week he crawled out of his crib and we had to switch his crib to a toddler bed and he seems ten times more grown up. Now when he wakes up in the morning he runs to the side of my bed and says “mama up” and it’s my favorite part of the day. I love waking up to him just wanting to be held and now that he is talking more I love that we can just sit and lay in bed and have conversations. Sometimes I have no idea what he’s saying but I love to lay there and listen anyways.

I can’t wait to see what this year brings!! Someone told me each stage gets better and I really feel that – it’s bitter sweet watching him grow. He brings so much joy to our family! Happy Birthday BECKAM!! WE LOVE YOU!!

3 Ways To Wear Your Favorite...