So excited to share with you guys we’re having a baby!! If you follow on Insta you probably already saw the news 🙂 I was going to do blog post the same day we announced, but after we shot them I just got so excited to post, I didn’t finish the blog post 🙈.  So here I am a couple days later …. thanks for being so patient!! 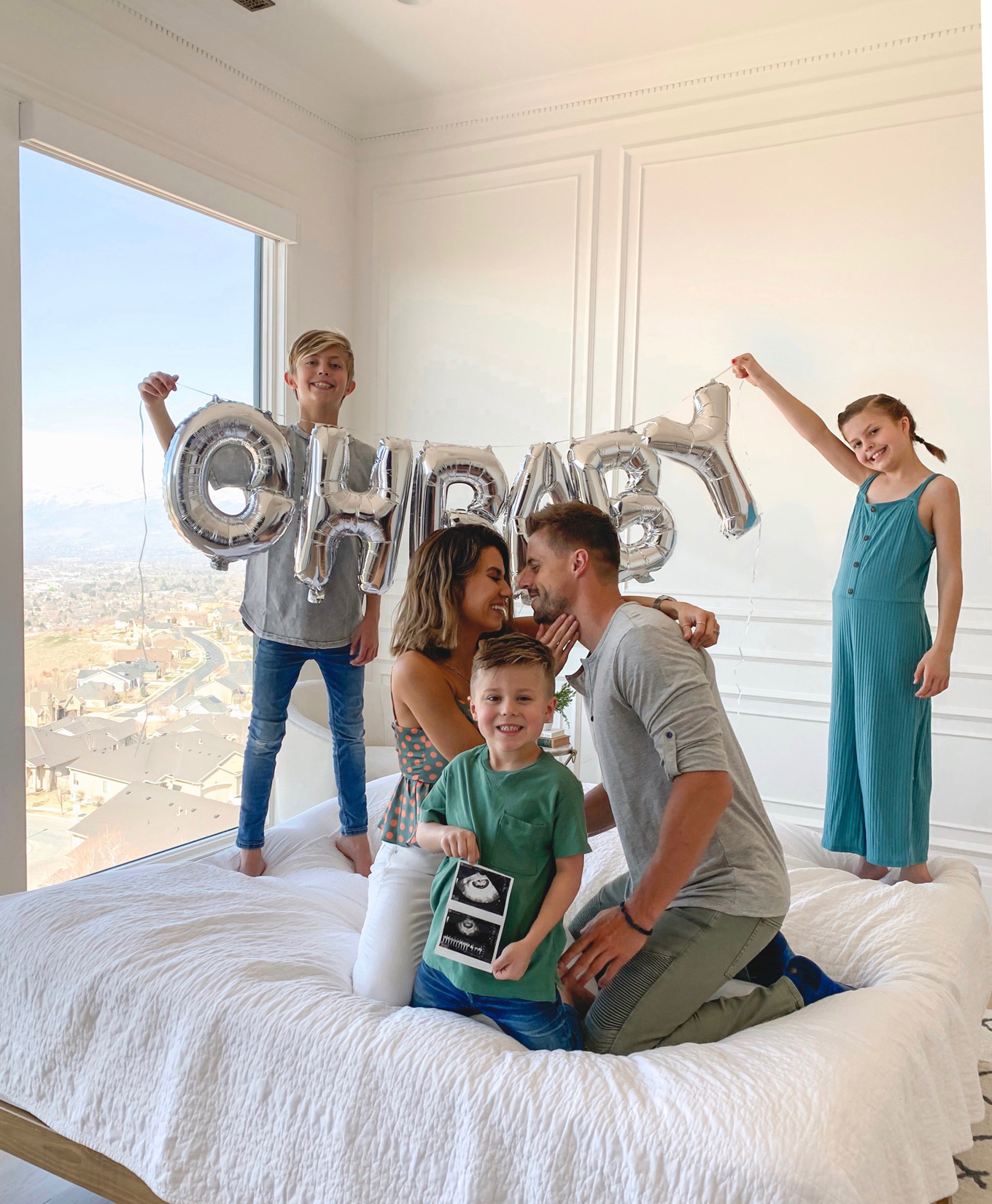 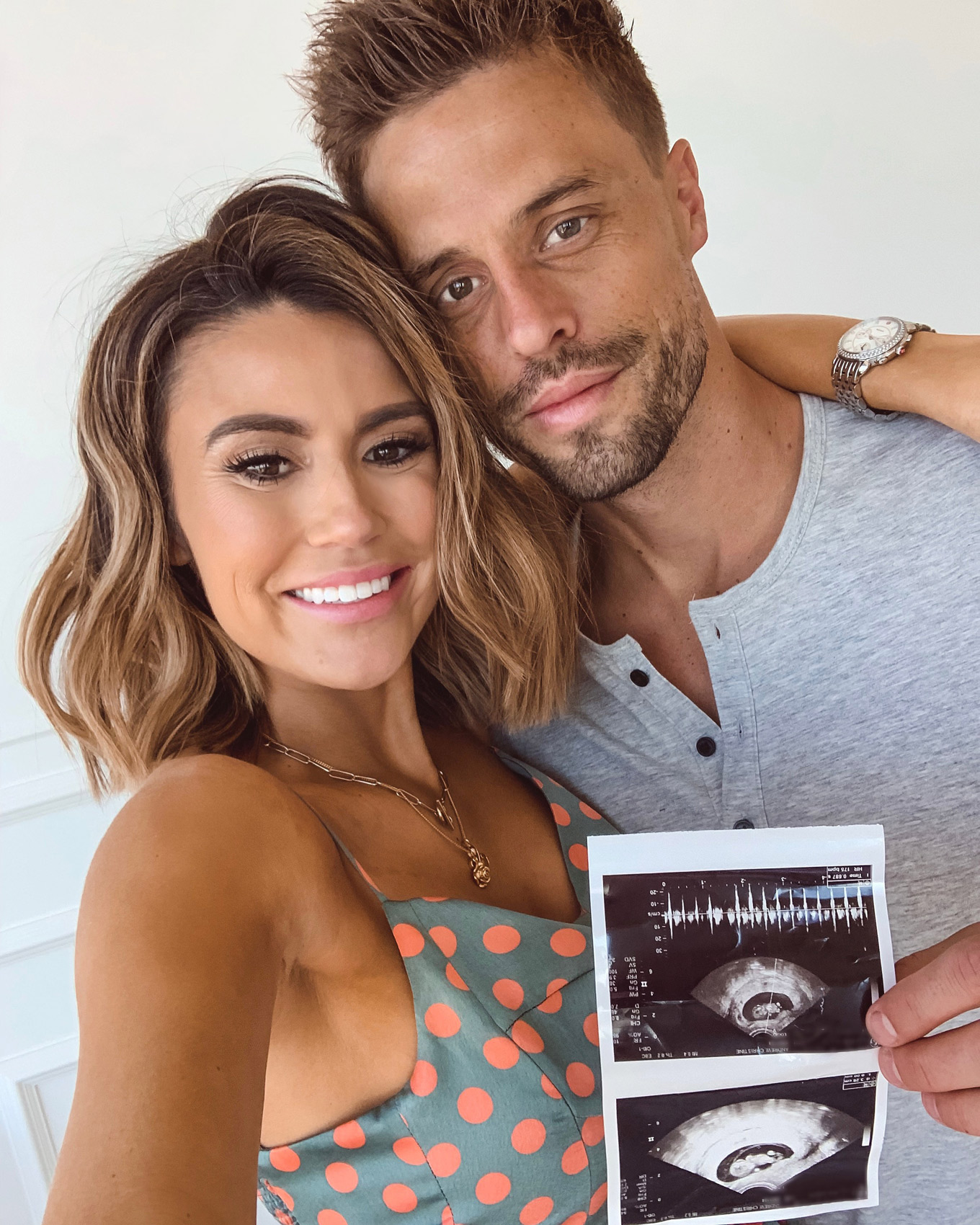 We are so so excited!! I’m due in October! So I’m still in my first trimester 🙂 I was sick for a couple weeks and now it’s just kind of faded to “evening sickness” I’m super tired and nauseous by like 7-8 and asleep before 9 or 10 at the latest. It’s crazy I can’t remember the last time I slept so much!!

How I got pregnant? This question has been flooding in, as a lot of you have been following along as I shared early on this pregnancy wasn’t as easy as our first with Beckam. (Those that are new here – Mara and Wes are my step babies, so Beckam is my only biological son.) It took us a little over a year to get pregnant this time around, and I want to start this by saying I know a lot of people who have been through a lot more,  my cousin, who is one of my best friends, it took her 6 years to get pregnant. A lot of our other family members have been through it too. They were all such a huge support to me! I realized there may be women out there who don’t have family or friends who had been through the same thing, so I wanted to share our struggles so that someone who felt alone or just needed someone to vent to wouldn’t feel so alone. Also writing has always been really therapeutic for me. I know a year seems like nothing to someone who has been trying for 3 or 5 or 9 years, but anytime you are trying to have a baby and it’s not working out, its frustrating and emotional, and at times it feels really isolating. I posted this quote by Jimmy Fallon on my instagram but it really stood out to me, because everyones journey is so different:

“We tried for a long time, for five years. I know people have tried much longer, but if there’s anyone out there who is trying and they’re just losing hope . . . just hang in there. Try every avenue; try anything you can do, ’cause you’ll get there. You’ll end up with a family, and it’s so worth it. It is the most ‘worth it’ thing. I’m just so happy right now. I’m freaking out.” 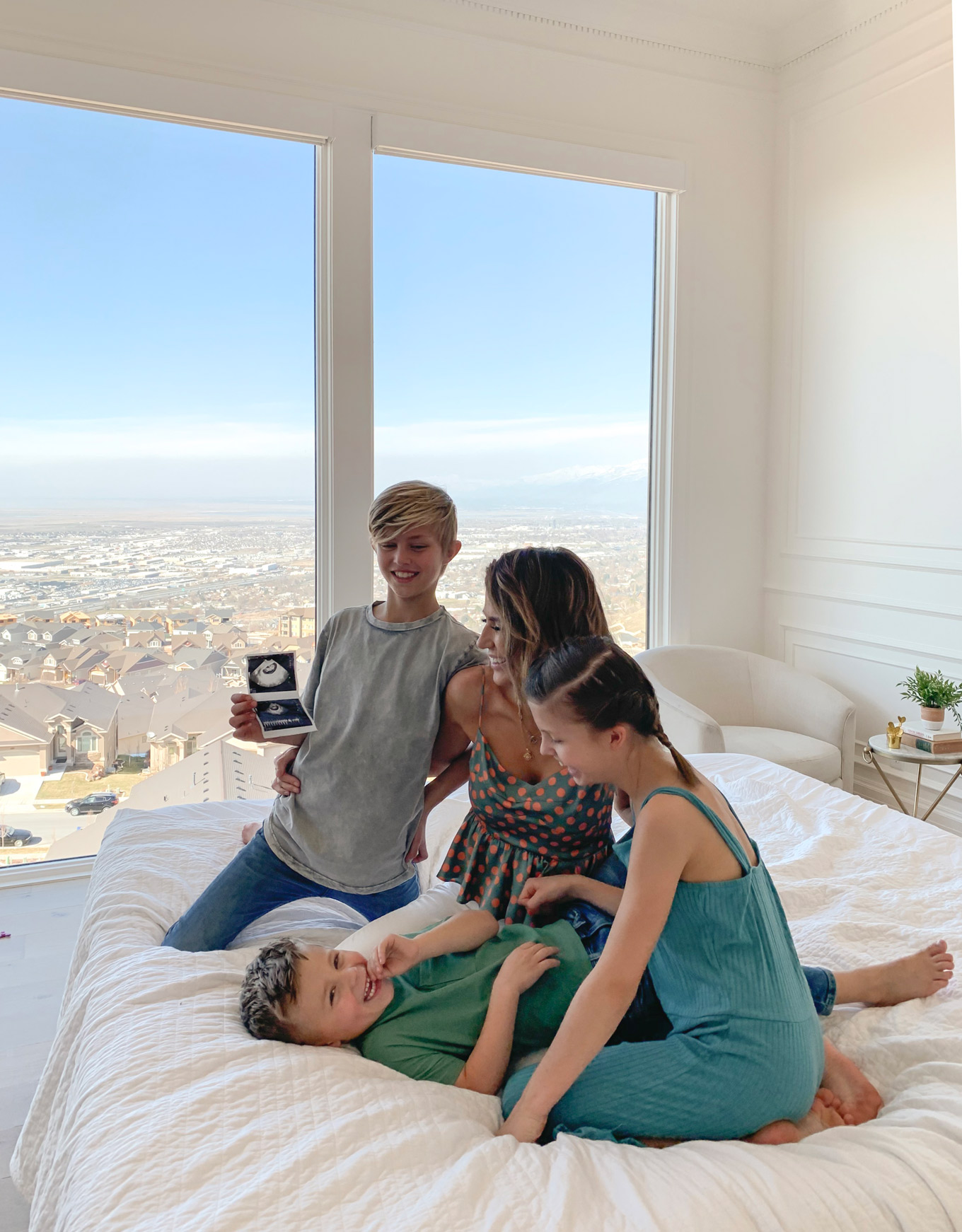 So what all did we do?

We had been going to a fertility clinic since September.(If you’ve been trying and don’t know when to call – they say to wait until 9 months of unsuccessful pregnancy, a lot of clinics are hard to get into, it was a 3 month wait for ours so I called in June to set our apt.) I wrote more about it here.  A quick summary of why I wasn’t getting pregnant was I wasn’t ovulating. I have PCOS (polyscistic ovaries) which makes my cycles very irregular. The likelihood of me getting pregnant on our own was very small, because I can’t time my cycles, and I don’t know when I’m ovulating. After we did all the fertility testing, we spent 3 month medicating my cycles so I would ovulate. Then I would take a different medicine that would make me have my period if I didn’t have a successful pregnancy that month. During this time we did three rounds of timed intercourse with injectables. What does that mean exactly? You’re taking medicine every day to help you help ovulate. About a week before they think you will be ovulating you start coming in every couple days to get a ultrasound to see if you have “follicles” that are growing.  Follicles are what holds the baby. When you’re on clomid or femara, the likelihood of having multiple follicles is higher, because it’s helping you make them.  They want your follicles to grow to about a 17-18mm. On our final round when I got pregnant I had three mature follicles so technically we could have had triplets haha. But only one took 🙂 I promise there’s no surprises coming just one ;). Once they grow to 17-18mm you take a trigger shot at home in your belly by your belly button. I remember re-reading the steps like 50 times because I was so scared I would mix something wrong, or mess it up somehow.  I hate needles so much so once we mixed the medicine, I would make Cody give me the shot.  A trigger shot is full of different hormones that help your follicles mature and increase your ovulation. Once you’ve taken the shot, the doctor gives you two times that you will be “most fertile” to make the baby. You then take progesterone hormones everyday to help the egg continue growing if it took. The final round worked!! and I got pregnant!! It was actually our final round  before we moved to IVF. So I am so thankful it worked!! I’ve followed so many women who have done so many rounds of IVF and the needles scare me so much, my heart goes out to them ❤️.

With a fertility clinic they monitor you’re pregnancy until 9-10 weeks, because their is just higher risk for something to go wrong. We went in for our first ultrasound and they saw the implanted egg, but  no heart beat. She told me not to stress yet, because sometimes it’s a little later, it didn’t mean I would have a miscarriage. I still  left crying. Even though they had warned me, I still felt like something had to be wrong, and I tried to convince myself not to really think I was pregnant and get my hopes up. Cody is so positive and he kept reassuring me everything was ok. That felt like the longest week as we waited to go back in. We didn’t tell any friends or family I was pregnant, I just didn’t want my hopes up. We went back and this time we heard the heartbeat!! I was so happy!! She said everything was measuring great and the baby had a strong heartbeat! And here we are – I’m 11 weeks and anxious to wrap up the first trimester to get over the nausea!

I mentioned in my last post I was also seeing a foot reflexologist. I had so many people recommend acupuncture – but I tried it once a couple years ago and it gave me so much anxiety laying on my stomach with so many needles in my back (it doesn’t hurt) I just felt trapped,  I couldn’t do it. I really believe my foot reflexologist played a role in me getting pregnant. I started seeing her in December and she said I had a lot of stress and anxiety built up. They find pressure points in your feet that help detox your toxins. She also made me aware of my lack of balance in life and talked about how I needed to create more time for a baby. I really took what she said to heart, and set more time aside for family and recharging myself. I think it also helped we finally moved into our house, I think that was a huge stress for last year. She also told me what vitamins I was deficient on, and I started on those too. I think the combo of seeing her to get my body balanced, and the fertility treatment helped us get pregnant. And the biggest factor, God 🙂  I believe He has a plan for our lives and his timing is always better than ours ❤️ Looking back I honestly know I was too stressed and my body wasn’t ready last year to be pregnant.

This pregnancy has felt so different than when I was pregnant with Beckam. It’s hard to explain, I’ve had a lot bigger highs and lows and I’ve been a lot more sick this time around (You guys have probably noticed my endless applesauce packets on insta stories, they instantly calm my stomach.) I asked my OBGYN about it and she’s like welcome to pregnancy in your 30’s haha. Did you guys notice a difference between pregnancy in your 20’s and 30’s? 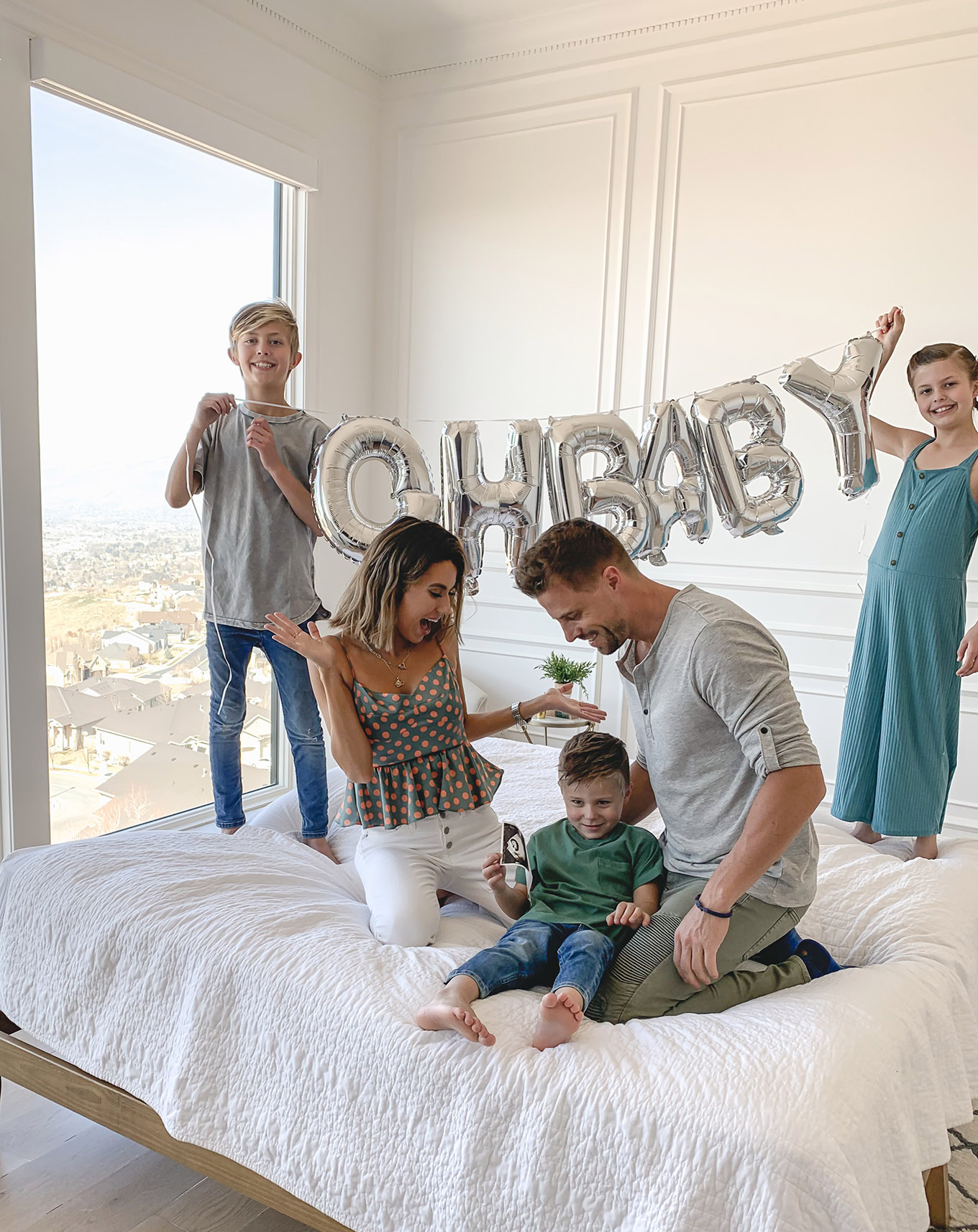 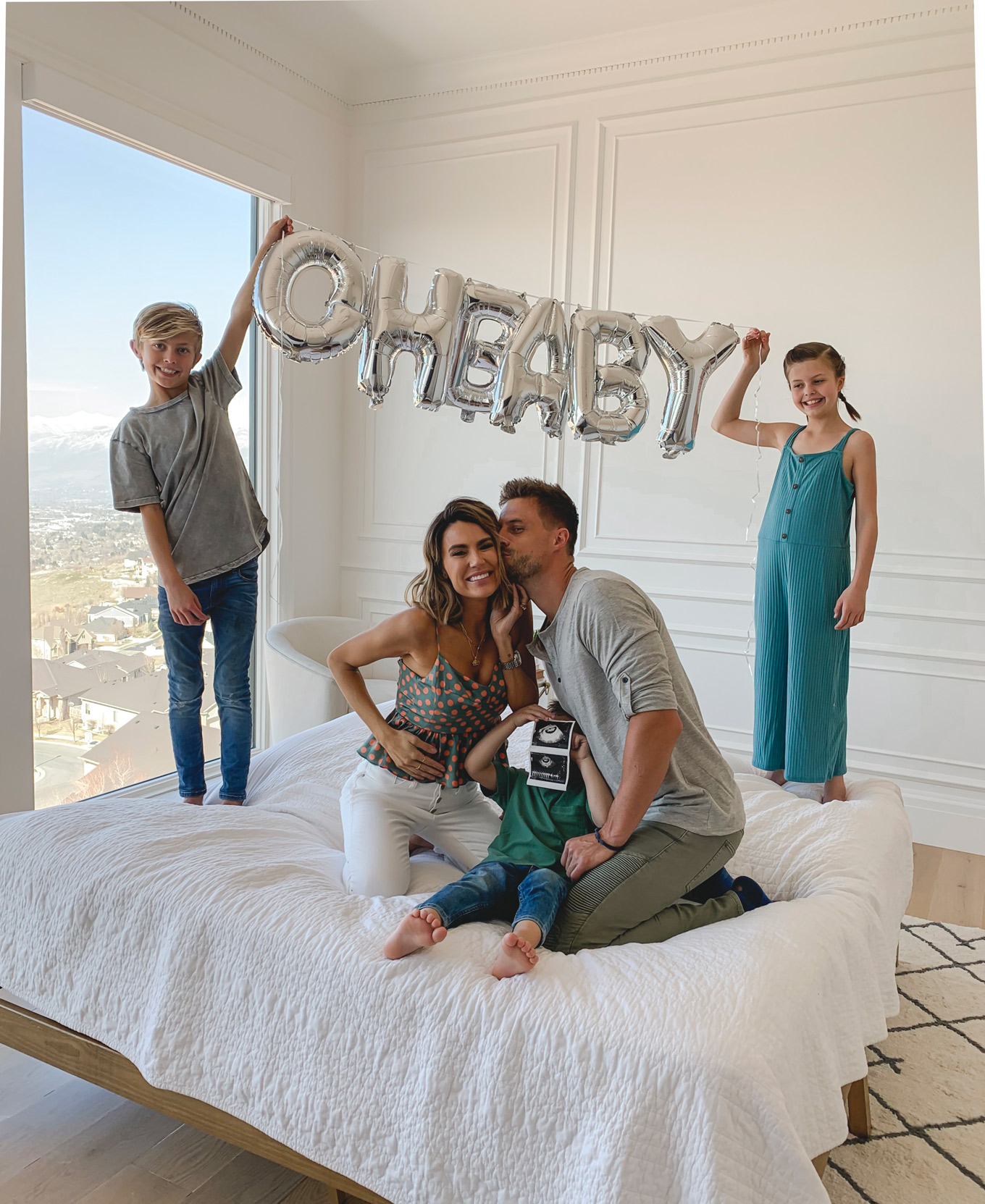 The kids are all so excited about the new baby!!  Beckam tells strangers and friends all the time it’s pretty funny. He actually knew I was pregnant even before I did. I’ll be sharing that story on Instagram later… We’ve all made our guesses wether its a boy or a girl. We are going to find out after Spring Break what we’re having. I’m so so excited!!

Thank you for your thousands of sweet notes and messages we read them all and continue to read them! Can’t wait to share more this journey with you!! Love you guys!